The following article is an exclusive profile interview with Todd McKinnon, CEO and co-founder of Okta, which first appeared in The Straits Times, the most read daily broadsheet newspaper in Singapore.

To read the print version of the full article, click here. 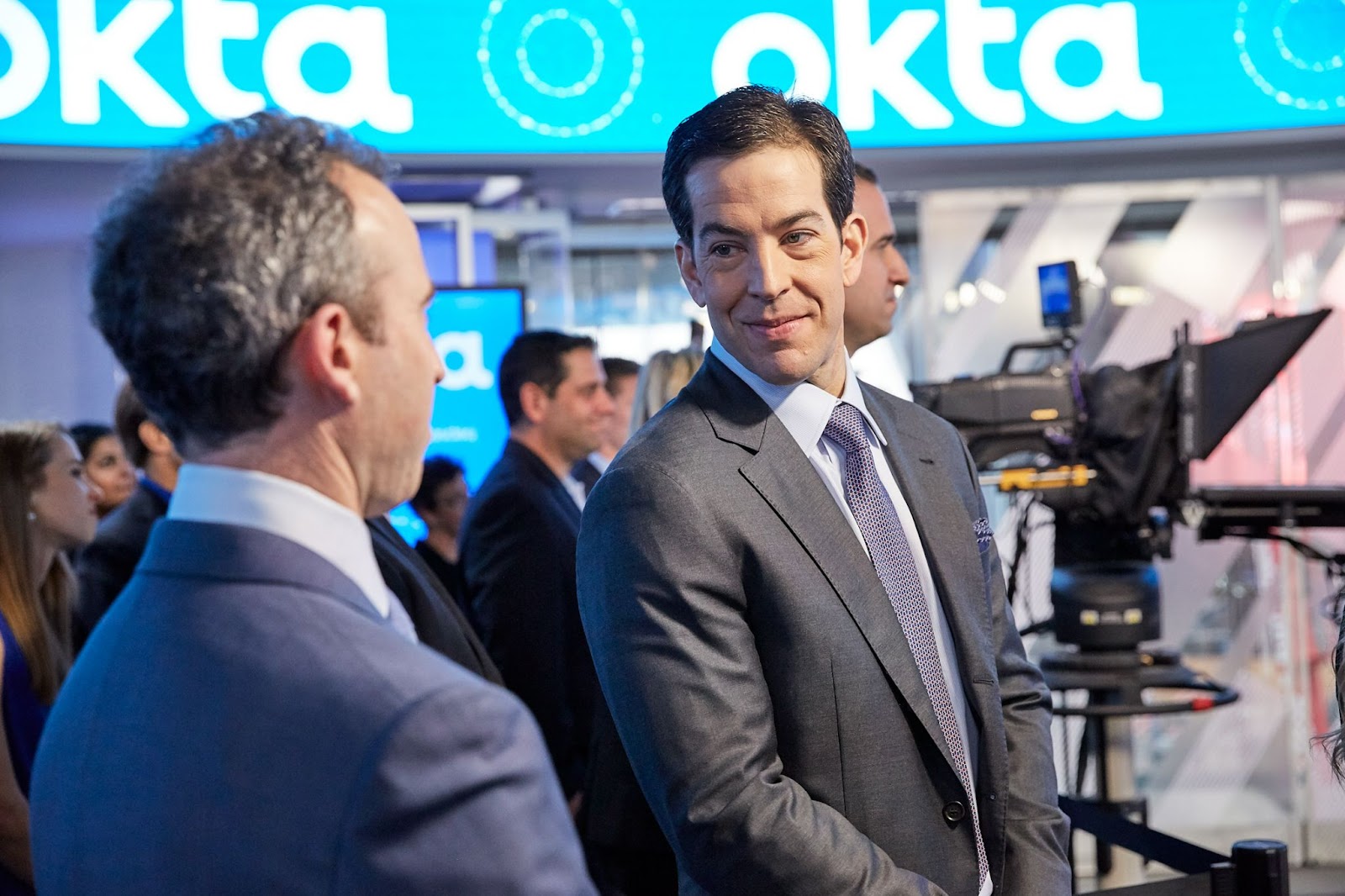 Okta co-founder and chief executive officer Todd McKinnon’s more urgent staffing challenge is to prevent employee burnout and to somehow convince his employees to consume their annual leave amid the hothouse environment of Silicon Valley. “I try to be public about when I take a day off and share it with the team. And this summer, I even asked everyone in the company to e-mail me their vacation plans,” he says.

Pick up Okta, Inc's latest annual report and on page 18 comes the warning that the company has a history of losses and these will continue in the foreseeable future. Another 26 pages down, it tells shareholders that it does not intend to pay dividends for some time to come.

Yet, the San Francisco-based identity and access management company, whose business has got a dramatic boost with the shift to remote work, has a market capitalisation of US$39 billion (S$52 billion). As identity security emerges as a key battlefield in cyber security, Okta, which reported total revenue of US$567 million for the first half of fiscal year 2022 and expects to finish the year with more than US$1.2 billion revenue, projects this to rise to US$4 billion by 2026.

With such guidance, it is small wonder that investors do not seem to care about immediate profits and would rather eye the long term. Okta shares, which were priced at US$17 each when the company went public in 2017, ended New York trading last week at US$255, up almost 13 per cent for the week as investors responded to its announcements of new and improved product offerings. That's helped push the personal net worth of Mr Todd McKinnon, the firm's 49-year-old co-founder and chief executive officer, to US$2 billion, according to Forbes estimates.

Entrepreneurs have fascinated me since I met, and later worked for, Mr Mike Bloomberg, the multibillionaire founder of the eponymous firm that dominates the field in online financial information. Mr McKinnon, who traded in a comfortable sinecure at Salesforce.com to start his entrepreneurial journey at the height of the global financial crisis, is that mould of man who cuts against the grain - starting his venture just as he and his wife had their first child, a time when most people tend to lower rather than add risk to their lives.

Perhaps it was something in his background. Growing up in San Francisco's Bay Area in a middle-class home in the mid-1980s as the son of a senior HR professional, Mr McKinnon observed with admiration the success and sense of independence enjoyed by uncles who ran an ice cream shop and a craft beer brewery.

At the time, there were only a handful of tech billionaires and the best known were Steve Jobs, Bill Gates and Larry Ellison. Certainly, the McKinnon family did not know any of them.

Starting as a developer with PeopleSoft, Mr McKinnon moved to then start-up Salesforce.com, where he swiftly rose to become senior vice-president. He worked there through the dot.com bubble and the rise of the Internet, leading an engineering team that grew from 15 people to more than 250, and the service from two million daily transactions to more than 150 million.

It was clear even back then that Salesforce, which today is worth US$285 billion, was going to be a powerhouse. Nevertheless, he felt it was time to strike out on his own. Amid the disruptions of the great financial crisis and the arrival of cloud computing, it was clear that there were going to be big, new, interesting companies that would be built.

Mr McKinnon took the plunge, teaming up with former Salesforce hand Frederic Kerrest to start Okta, a name that derives from the meteorological measurement of cloud cover.

Famously, he is said to have used a slide presentation - "Proposal to move to a new job starting a company (Why I'm not crazy)" - to convince his wife, Roxanne, about his leap to entrepreneurship. The clinching argument was that both Microsoft and Oracle had been started during poor economic conditions.

"It was a combination of the long-term desire (to be my own boss) and the opportunities offered by the technology transformation," he recalls. "Not that success was guaranteed. It was still a long shot. But these were some of the things that lined up to make Okta happen."

For the first half dozen years, there were moments when the founders feared the firm would fail - worries they kept to themselves.

Indeed, digital identity - Mr McKinnon describes it as "connecting and mapping a person to what he can do digitally" - wasn't even part of the initial business plan but something they fastened on to swiftly after realising the first plan wasn't resonating enough with customers.

Fortunately, the change of direction happened in the first two months of starting up, so there were neither sunk costs in a product involved nor egos wrapped around the plan.

The days of uncertainty - "I had to believe even when I didn't believe and act as though I really believed" is how he describes them - are long gone.

Today, the stress is more about making sure he takes the right decisions on behalf of his 4,200 staff and to maximise the opportunity and growth prospects as well as protect his customers.

"It is not the same as existential stress but (it is now about) high-class problems,"

Mr McKinnon, who is Type 1 diabetic, says with a measure of relief.

Indeed, earlier this year, Okta took care of one high-end problem - competition - by acquiring consumer identity and access management firm Auth0 for US$6.5 billion in an all-stock deal.

While they did compete in some marginal segments, Mr McKinnon says he had maintained good relations with Auth0 co-founder and CEO Eugenio Pace, often comparing notes.

"I am super competitive and if we'd been head-to-head rivals, I wouldn't know if I would have been able to buy them or would want to beat them instead," says Mr McKinnon. "We talked, and Eugenio got excited about building this company that's totally focused on solving the (identity) problem… rather than leave it to Amazon or Microsoft. We don't care what Web meeting software you use - Microsoft wants you to use Teams. We don't care what e-mail system you use - Google wants you to use Google. We just want customers to have the right choice to make their businesses successful."

Buoyed by Auth0, fiscal 2022 revenues are expected in the range of US$1.25 billion, indicating year-on-year growth of 50 per cent. The market for identity is estimated to be US$80 billion, so Okta should not run out of asphalt any time soon, especially as it has begun to establish its presence in the Asia-Pacific with offices in Australia, Japan and Singapore.

Much of the cash the firm generates is ploughed into sales and marketing to win long-term contracts that's then amortised over the course of the revenue, the reason why Okta is not worried that it will be reporting losses for a while yet.

"We're actually cash flow positive," says Mr McKinnon. "We don't need any more investment. We don't need to raise money or go to the capital markets. We have been self-funding for many years. But, because of the way subscription revenue works, we are not profitable from the accounting perspective...With this recurring revenue base building up over time, we can be big and be very profitable at scale."

Why this fascination for Google?

"There aren't many companies that get the scale Google has in terms of systems," explains Mr McKinnon. "And we're building this identity system for every company in the world. So it's running at a massive scale and it's going to get bigger...The odds being what they are, it's more likely we'd hire someone from there, given they have a lot of people."

Mr McKinnon's more urgent staffing challenge is to prevent employee burnout and to somehow convince his employees to consume their annual leave amid the hothouse environment of Silicon Valley.

This summer, he himself took time off to holiday in Napa Valley with his wife and two children - letting everyone in his company know about the CEO's leave plans.

"I try to be public about when I take a day off and share it with the team. And this summer, I even asked everyone in the company to e-mail me their vacation plans. I got about a thousand replies."

Mr Todd McKinnon is the CEO and co-founder of Okta, Inc. He is 49 years old.

Before setting up Okta in 2009, Mr McKinnon was senior vice-president at Salesforce. com for five years.

He began his career at PeopleSoft, where he was a software developer between 1995 and 2003.

A native Californian, Mr McKinnon has a bachelor's degree in business from Brigham Young University and a master's in computer science from California Polytechnic State University.

Mr McKinnon is a mountain bike and fitness enthusiast.

He is an adviser to Family House and an advocate for equality and inclusion.

He and his wife, Roxanne - a consultant in environmental engineering - are parents of a girl and a boy.

Okta, Inc is an identity and access management company headquartered in San Francisco. It has more than 13,000 customers.

Earlier this year, it acquired fellow identity management company Auth0 for US$6.5 billion (S$8.8 billion) in an all-stock deal. The combined firm has 4,200 employees. Okta is projecting annual revenue of US$4 billion by 2026. First-half total revenue for FY2022 was US$567 million. It has a market cap of US$39 billion. 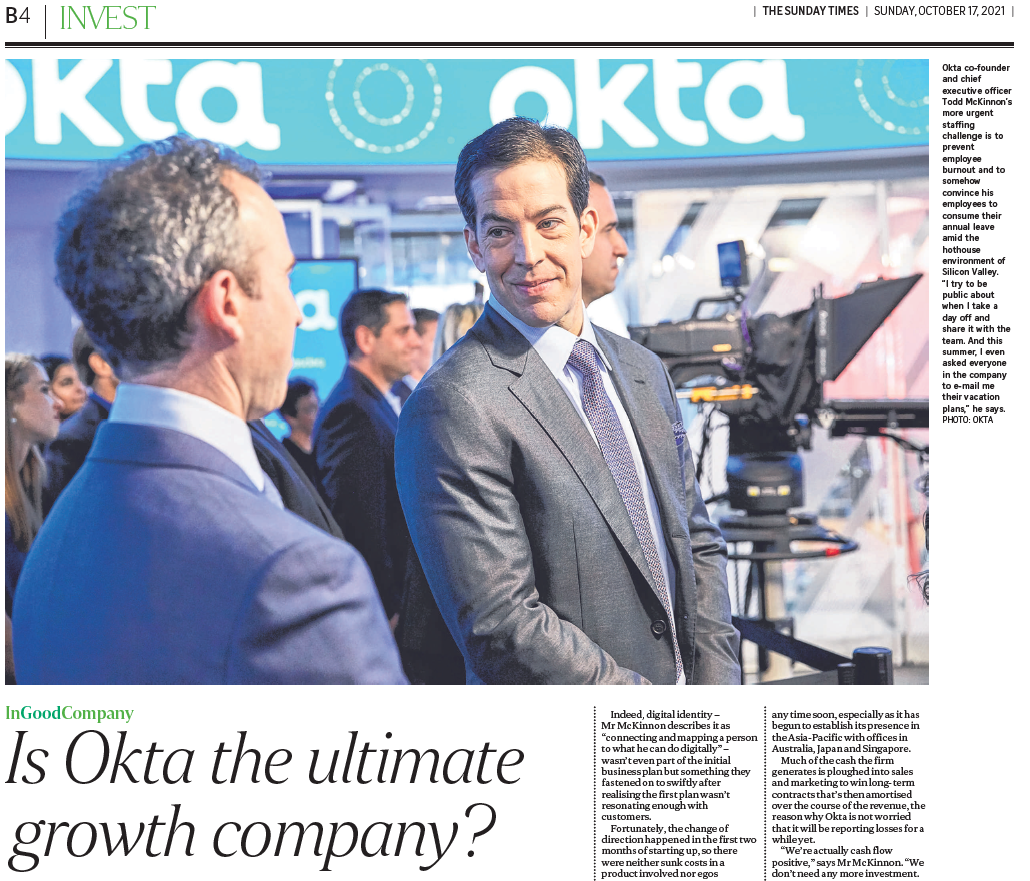 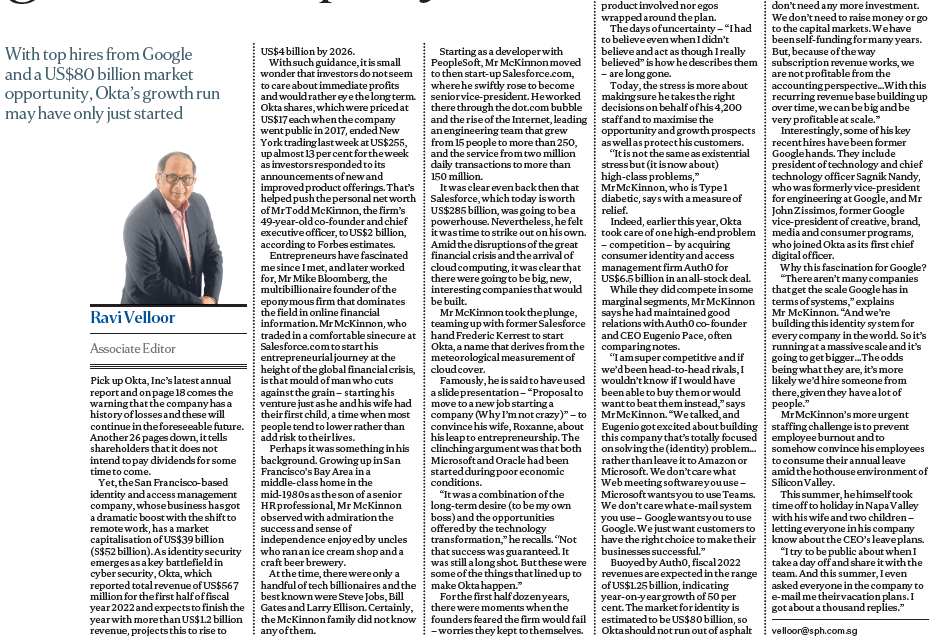 Share:
October 17, 2021
Okta
The foundation for secure connections between people and technology

Okta is the leading independent identity provider. The Okta Identity Cloud enables organizations to securely connect the right people to the right technologies at the right time. With more than 7,000 pre-built integrations to applications and infrastructure providers, Okta provides simple and secure access to people and organizations everywhere, giving them the confidence to reach their full potential. More than 15,000 organizations, including JetBlue, Nordstrom, Slack, Takeda, Teach for America, and Twilio, trust Okta to help protect the identities of their workforces and customers.