Pretty good privacy (PGP) is an encryption program that uses a combination of public, private, and random keys to block data from prying eyes.

If you have sensitive data moving from one place to another, PGP could block it from view. And you could use the system to ensure you're dealing with a trusted communication partner that hasn't tampered with data.

PGP was developed in 1991, and it was surrounded by plenty of controversy after its inception. The developer released the program as freeware, but a secondary company claimed ownership, and lawsuits were filed.

Despite its inauspicious beginning, PGP took off within the security community. Since it was available for free, plenty of companies incorporated the concepts into their products. Now, PGP is the dominant method organisations use to ensure email security. 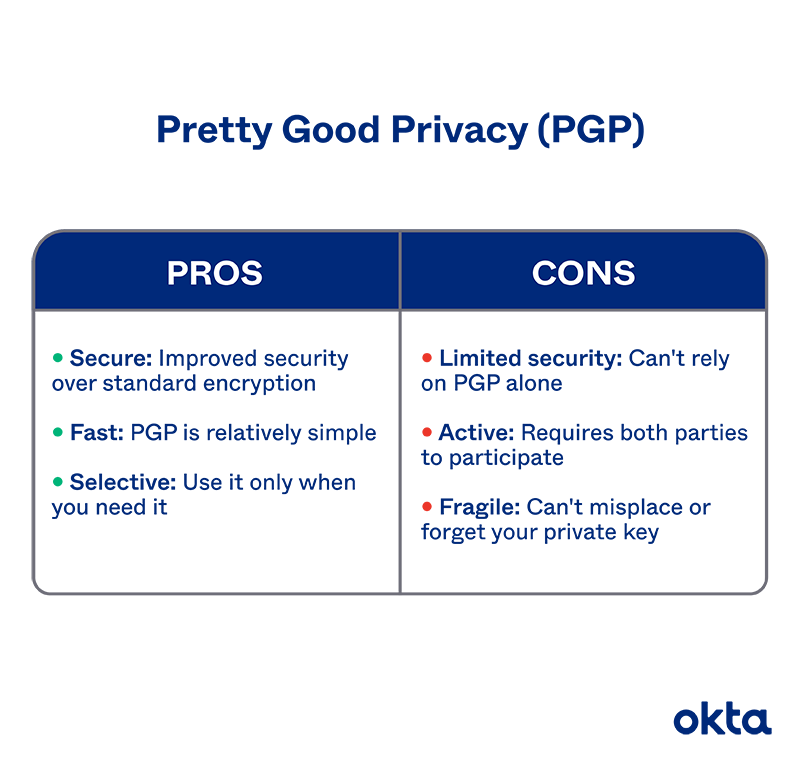 What Is PGP Used For?

Any connected device sends and receives data throughout an average day. Security experts use all sorts of tools to keep communication secure. They lean on PGP for three very specific use cases.

PGP is most often used for:

Some people use PGP out of fear of government intrusion and spying. But as one blogger points out, plenty of average people lean on the technology to keep their communication safe. He cites:

In general, PGP can be a great tool for anyone talking about sensitive, damaging, or secret items that could cause damage if released into wider consumption.

How Does PGP Encryption Work?

As we mentioned, PGP can be used for all sorts of things, including file encryption. But since the technology is so closely associated with protecting email, that's the function we'll focus on here.

Before getting started with a PGP-encrypted email, you'll need three things.

When you're ready to send your first message, a predictable sequence begins.

Some programs take security a step further. They create a session key, unique to each conversation, that is encrypted with the public key of the recipient. That encrypted key is the only thing sent to the recipient, and that person's private key decrypts the session key and then the message.

And some people who are extremely concerned about security go even further. They require a quick phone call between the sender and the recipient to verify identities and keys.

Email has been around for decades, and most of us send hundreds of notes each month. Do all of them need PGP protection? And are you missing out if you don't join in?

Common drawbacks associated with PGP include:

Some people experiment with a few instances of PGP encryption before they go all in. You might require it for something like a sensitive project or an upcoming party. If it works for you, then you could start incorporating it into more projects.

While the technology surrounding PGP encryption is complex, getting started is often quite simple.

You must choose a provider that can help protect your email and your files. Choose from:

Everyone has different needs and preferences, so citing the "best" program is difficult. But in general, good PGP solutions are easy to use but come with robust customer service options, so you can reach out if you get stuck.

Journalists and those with intense security demands often use PGP. Unfortunately, terrorists use the technology too. But anyone who wants to keep private conversations private could benefit from investing in the technology.

Experiment with tools and see which offers the benefits you need at a price you're willing to pay.

Some PGP encryption tools offer certificates to verify the authenticity of keys and their owners. Different levels of certificates exist, with level 0 meaning that only the key is certified and level 1 meaning both the owner and the key are verified.

Yes. Some advocates believe in a so-called "circle of trust," in which web users know one another and can verify message authenticities quickly. If plenty of people accept PGP technologies, keys will be widely shared and saved. That could help to eliminate the Zero Trust model.

Protect your sensitive information with Okta’s PGP key solution. We'd love to show you how it works and how it can help keep your company's data safe and secure. Contact us and let's get started.

People Are Freaking Out that PGP is 'Broken,' but You Shouldn't Be Using It Anyway. (May 2018). Vice.

How to Use PGP. ProtonMail.

Secure Your Emails in 5 Minutes Using PGP. (September 2018). The Startup.