Active Directory is a Microsoft product used to organise IT assets like users, computers, and printers. It integrates with most Microsoft Office and Server products.

Lightweight directory access protocol (LDAP) is a protocol, not a service. LDAP is used to talk to and query several different types of directories (including Active Directory).

What Is Active Directory?

Microsoft creates a lot of IT software, from Windows desktops to Windows Server, Exchange, Sharepoint, and more.

In the IT environment, users don’t want to use a separate password for each application they access. And IT admins want to be able to group people together and manage access to computers and printers.

Active Directory was created to ease the management of users and computers by storing information about them in a single directory.

Imagine working at a company without a directory:

The directory brings together, in a central service, information about all the people, computers, and other assets in the organisation. It also stores credentials (like your username and password) so it can authenticate you to all the applications you use.

In Active Directory, assets are sorted into one of three tiers.

Each one of these levels has access rights and communication privileges unique to it. 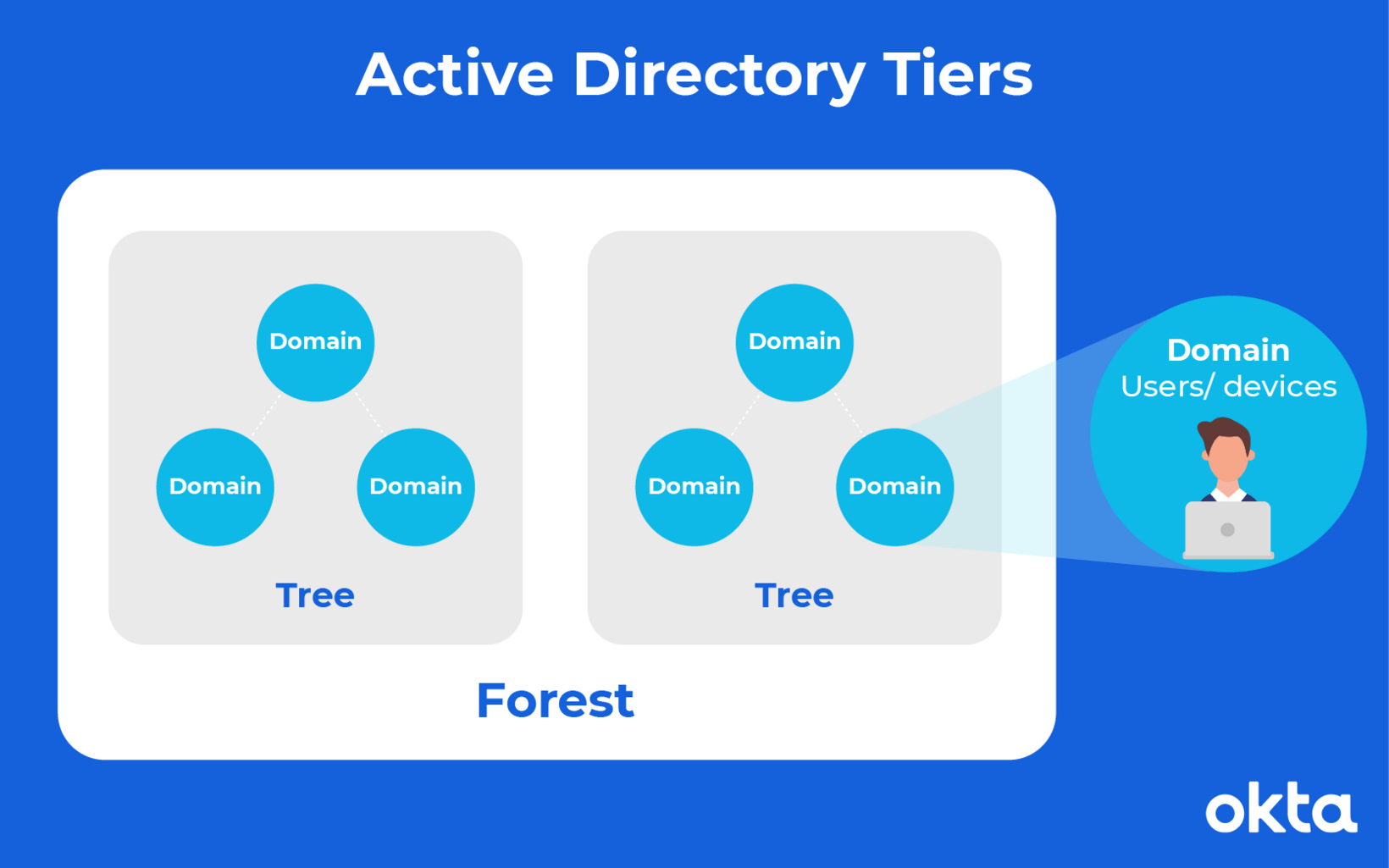 Active Directory supports a variety of ways to authenticate users. Over the range of its life, Active Directory has supported LAN Manager, NTLM, and Kerberos. Each time, the authentication protocol evolved to be more usable and secure.

Active Directory’s main purpose was to bring together all the Microsoft technologies to allow users to easily access resources and to allow administrators to securely define their access.

LDAP is a protocol that was designed for applications to query user information very quickly and at scale. It was ideal for something like the telecommunications or airline industry.

Active Directory was designed for enterprises with maybe a few thousand employees and computers. LDAP was a protocol designed for applications powering the telephone wireless carriers that needed to handle millions of requests to authenticate subscribers to the phone networks.

As a protocol, LDAP is primarily concerned with:

How Do LDAP & Active Directory Compare?

LDAP is a protocol, but vendors built directories where LDAP was the primary means of communicating with the directory. They were often known as LDAP servers.

The servers were mainly used as an information store about users for an application. As a result, they are sometimes compared with Active Directory. This led to some confusion, with people asking which is better: an LDAP server or Active Directory?

There isn’t really a good answer to this question, as it’s not a fair comparison. People might really be asking a different kind of question. For example, is Active Directory a better choice for an application directory than using Ping Identity Directory or Oracle Internet Directory?

Typically, LDAP servers are appropriate for very large-scale applications, such as the millions of subscriber queries made in a wireless telecommunications platform.

Due to its design, Active Directory is not ideal for very large-scale implementations with a single community of users. It does scale very well when the organization is distributed into multiple forests and domains.

There are Active Directory implementations with hundreds of thousands of users, but they are all managed in localized domains and forests.

Active Directory is excellent at its core job, which is managing access to on-premises Microsoft-based technology, such as Windows clients, servers, and SharePoint/Exchange.

Which Is Right for Your Business?

At Okta, we support both Active Directory and LDAP environments. The distinct benefits of each work better for certain businesses.

Many of our customers have both Active Directory and LDAP servers in their organization. We are able to connect to both and unify the information into the Okta Universal Directory.

What Is Kerberos Authentication? (October 2009). Microsoft.