Companies who employ DevOps programs have a goal in mind – to enable velocity at scale. Getting software out the door faster and more effectively is becoming critical to remain competitive in today’s fast-paced technology landscape. When speed is the name of the game, automation is key. Without the right guard rails, however, automation can be extremely dangerous.

Making security part of your DevOps processes, not an afterthought, puts you in a better place to effectively scale your automation. By injecting controls early on, when developers and operations teams are writing the automation, you can be confident that the guard rails are in place once the automation takes over. This practice is known as “Shifting Left”.

As more companies adopt these practices, HashiCorp Terraform has quickly become one of the leading open source infrastructure automation tools. Its simple to use declarative language enables organisations to manage large-scale fleets of dynamic infrastructure, quickly provisioning and deprovisioning environments in a more elegant, version-controlled manner. This helps avoid situations of configuration drift, ensuring consistent environments as you scale up and down.

In practical terms, with Okta and HashiCorp, you can configure and automate the following, enabling velocity at scale without compromising on security:

Terraform is also extendable through a plug-in framework known as Providers, which delivers a wrapper around a wide range of external APIs, making it easier to write code for various technologies. A Provider is responsible for understanding CRUD (Create, Read, Update, and Delete) API interactions. For example, the AWS Terraform Provider includes helpers to manage the lifecycle of resources, such as creating and destroying VPCs, EC2 instances, security groups, and more. Providers are also available for users of Google Cloud Platform and Microsoft Azure, delivering similar functionality to provision infrastructure resources.

Customers of Okta Advanced Server Access who use Terraform to automate infrastructure have an easy way to bake identity & access controls directly into their infrastructure as code. When spinning up a cloud instance across any of the IaaS platforms – AWS, GCP, or Azure – there is a short script to execute on startup that writes the local configuration and installs the Okta ASA server agent. Once the server agent is installed, it communicates with the backend API to know which user and group accounts to create, and which sudo entitlements to write.

The Okta customer in this case, Splunk, wanted an automated way to create an Advanced Server Access project in parallel with creating an AWS environment any time a new tenant of Splunk CloudTM was created. This would enable both the infrastructure and the respective access controls to be fully automated – with Okta as the source of truth for Identity. Senior Security Engineer for Splunk, Aleksei Denisov, wanted both automation processes run via Terraform, so he wrote a Terraform Provider to interface with the Okta ASA API.

In doing so, the Splunk team were able to bring key identity controls early on in the automation process, putting the right guard rails in place, while also streamlining access to environments for the Engineering & Support staff. "I was able to fully automate access control processes by incorporating it into a build pipeline,” said Denisov. “This ensures that access provisioning is instant and consistent."

In the spirit of community sharing, Aleksei went above and beyond, open sourcing his work through Splunk, enabling anyone to use this Provider across any cloud platform. To match that effort, we at Okta have added to and taken ownership of the Advanced Server Access Terraform Provider, and are pleased to announce it has been officially certified by the HashiCorp Terraform team. Thank you Splunk and HashiCorp!

And an extra special thanks to Nicole Lam, Partner Solutions Technical Architect at Okta, for leading the effort to partner with HashiCorp and certify the Terraform Provider. Thank you Nicole! 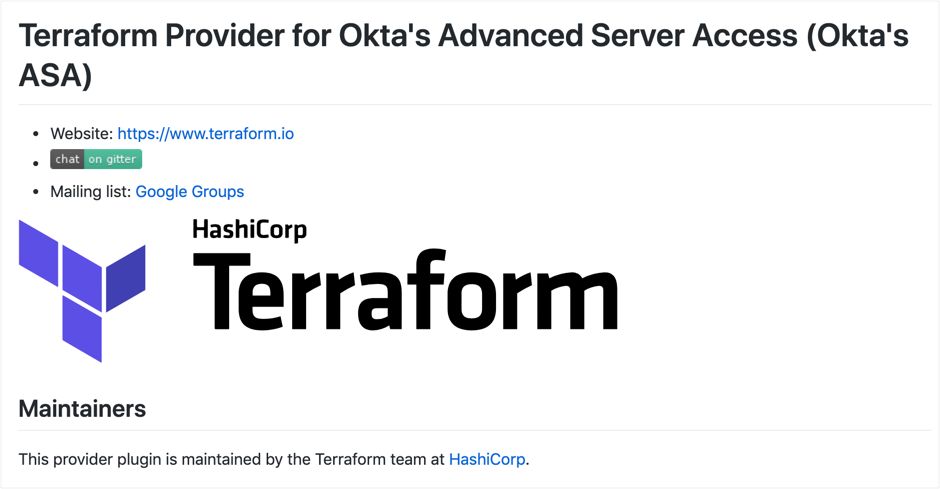 As an added bonus, we have also written up step-by-step instructions on how to use the newly certified Terraform Provider in an AWS environment. You can follow along on the Okta Developer Blog: https://developer.okta.com/blog/2020/04/24/okta-terraform-automate-identity-and-infrastructure

Okta is changing the game for secure server access in the modern cloud era – where resources are dynamic, and the surface area is ever-changing. Traditional practices of privileged access management break down in this world – the products don’t scale, they don’t automate well, and they quickly become bottlenecks. By making server access a core Identity use case behind its Zero Trust architecture, Okta is able to streamline the lifecycle of accounts and policies, better supporting your scalable, elastic infrastructure.

HashiCorp is the leader in multi-cloud infrastructure automation software. The HashiCorp software suite enables organisations to adopt consistent workflows to provision, secure, connect, and run any infrastructure for any application. HashiCorp’s open source tools Vagrant™, Packer™, Terraform, Vault, Consul, and Nomad are downloaded tens of millions of times each year and are broadly adopted by the Global 2000. Enterprise versions of these products enhance the open source tools with features that promote collaboration, operations, governance, and multi-data center functionality. For more information, visit https://www.hashicorp.com or follow HashiCorp on Twitter @HashiCorp.

By Luise Petter Customer expectations seem to grow more demanding by the day. Big brands are championing seamless digital experiences and similar businesses are expected to…

How Okta Elite Partner, Upright Security, Supports Customers in Every Step of Their Identity Journey

By Luise Petter Securing access to digital assets has never been more important. In our increasingly connected, cloud-powered world, propelled into a new age of remote access…

By Brett Shaw Today’s cyber-attacks target people, not infrastructure. Threats are constantly evolving to target the weakest point in an organisation's attack surface– the…

By Ana Kutcher There are a number of deployment challenges that might drive an organisation to enlist Okta’s Professional Services team, including short timelines, complex…