What Is LDAP & How Does It Work?

Lightweight directory access protocol (LDAP) is a protocol that makes it possible for applications to query user information rapidly.

Someone within your office wants to do two things: Send an email to a recent hire and print a copy of that conversation on a new printer. LDAP (lightweight directory access protocol) makes both of those steps possible.

Set it up properly, and that employee doesn't need to talk with IT to complete the tasks.

Companies store usernames, passwords, email addresses, printer connections, and other static data within directories. LDAP is an open, vendor-neutral application protocol for accessing and maintaining that data. LDAP can also tackle authentication, so users can sign on just once and access many different files on the server.

LDAP is a protocol, so it doesn't specify how directory programs work. Instead, it's a form of language that allows users to find the information they need very quickly.

LDAP is vender-neutral, so it can be used with a variety of different directory programs. Typically, a directory contains data that is:

Sometimes, people use LDAP in concert with other systems throughout the workday. For example, your employees may use LDAP to connect with printers or verify passwords. Those employees may then switch to Google for email, which doesn't rely on LDAP at all.

LDAP isn't new. The definitive whitepaper that describes how directory services work and how LDAP should interface was published in 2003. Despite its age, LDAP is still in widespread use today. 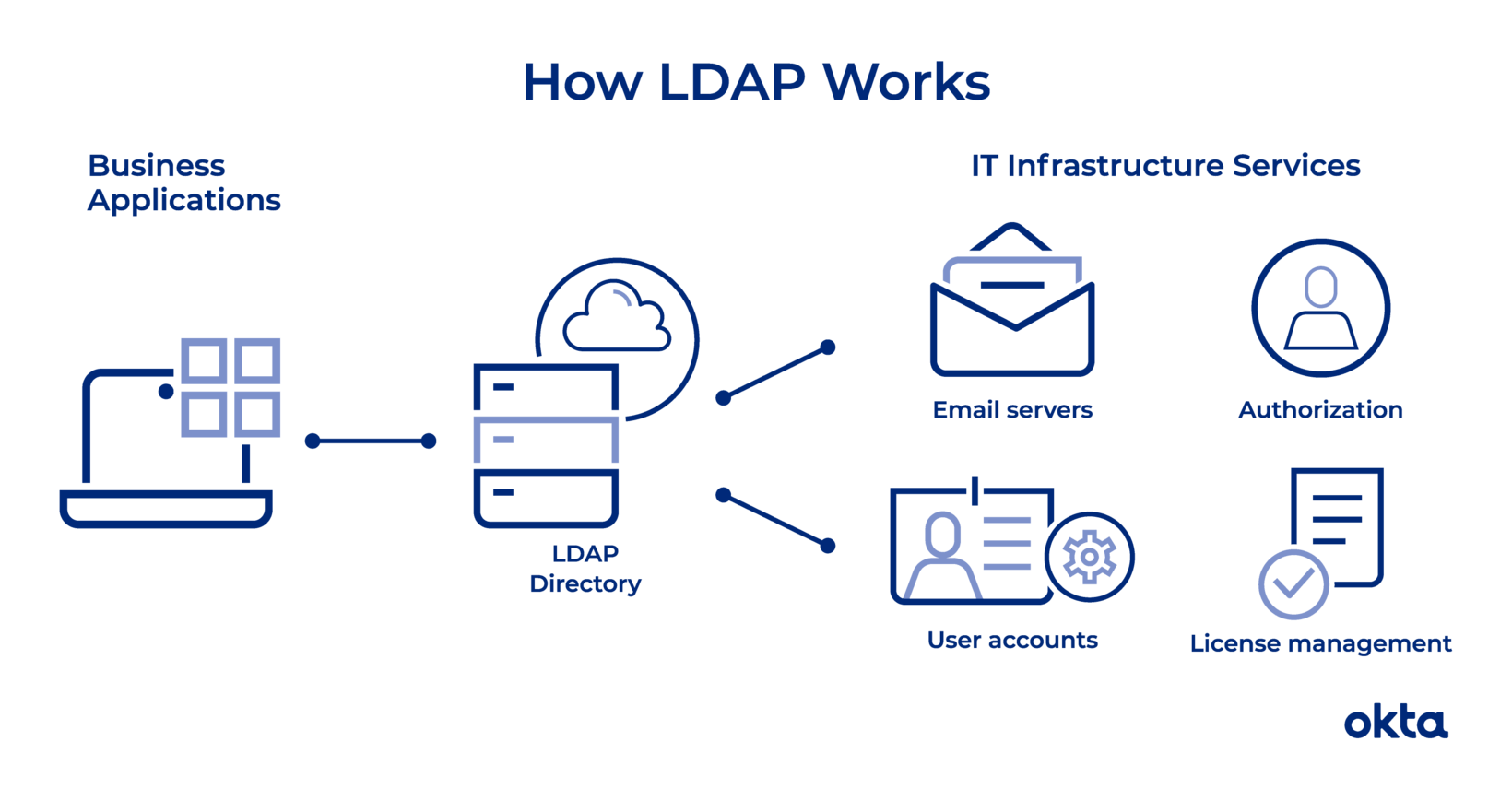 The average employee connects with LDAP dozens or even hundreds of times per day. That person may not even know the connection has happened even though the steps to complete a query are intricate and complex.

The search looks simple, but a great deal of coding makes the function possible. Developers must determine the size limit of the search, the time the server can spend processing it, how many variables can be included in a search, and more.

A person hopping from company to company might run searches with LDAP in each location. But the way the searches work and how they function can be quite different, depending on how the LDAP is configured.

Before any search commences, the LDAP must authenticate the user. Two methods are available for that work:

Some queries originate within the company's walls, but some start on mobile devices or home computers. Most LDAP communication is sent without scrambling or encryption, and that could cause security problems. Most companies use Transport Layer Security (TLS) to ensure the safety of LDAP messages.

People can tackle all sorts of operations with LDAP. They can:

The average person tapping away at a computer doesn't need to know the ins and outs of LDAP. But people who work on network security and access must have a deep understanding of core concepts and structure. And the language people use to describe LDAP can be impenetrable for novices.

Common terms you'll see as you begin to learn about LDAP include:

This is just a hint of the language you'll need to master to implement LDAP protocols properly. But since LDAP is an open-source protocol, plenty of documents exist that can help you get started and coding like a professional in no time.

Some people use LDAP and Active Directory interchangeably, and the habit causes a great deal of confusion. These two tools work together, but they're definitely not the same thing.

Active Directory is a proprietary directory tool that is used to organise IT assets, such as computers, printers, and users. As a Microsoft product, it’s commonly used within the Windows environment. If you have ever worked with Windows on a network, this system underpins some of the data.

LDAP is a protocol that can read Active Directory, but you can also use it with other programs, including those based on Linux. As a vendor-neutral protocol, you could use this tool to work with all kinds of products that have nothing to do with Windows.

So LDAP and Active Directory work together to help users. But they don't compete with one another, and they don't do exactly the same thing.

LDAP helps people access critical files. But since that data is sensitive, it's critical that you protect the information from those who might do you harm. If you're running in a hybrid environment with some parts of your data on the cloud, your risks are even more significant.

Okta can help you protect this critical information. Find out how.

What's LDAP? LDAP Linux How To.

A History and Technical Overview of LDAP. LDAP.com.

How to Make Your Company's Single Sign-On Implementation as Smooth as Possible. (July 2016). Forbes.