Why choose Okta and AWS

Enterprises are currently undergoing high-level initiatives around digital transformation, migrating assets and processes to the cloud in order to support corporate agility and modernize IT and security. The process can reduce the costs of infrastructure management and maintenance, remove legacy identity as a constraint, reduce IT spend on expensive client access licenses, and simplify and secure user access—especially remote user access—to IT services across cloud and on-premises assets.

As companies look to isolate and unwind their legacy directory services, Okta and AWS combine efforts to support safely moving any workload type to the cloud, whether that be via replacing, rehosting, replatforming, or refactoring.

The Okta Identity Cloud is a leading cloud-based identity platform that cloudifies a company’s identity infrastructure as part of a broader modernization of IT. Moving identity to the cloud allows for secure, appropriate user access to SaaS, public cloud, and premises-based applications from anywhere in the world via trusted endpoints.

AWS Directory Service for Microsoft Active Directory, also known as AWS Managed Microsoft AD, enables companies to run directory-aware workloads in the AWS Cloud, including Microsoft SharePoint and custom .NET and SQL server-based applications. It also provides seamless access to AWS services such as Amazon RDS for SQL Server and Amazon FSx for Windows File Server. AWS Managed AD can be run standalone— as a company’s only AD environment—or can be an extension of a company’s legacy on-premises identity infrastructure.

To connect Okta to AWS Managed Microsoft AD, the Okta Active Directory agent is installed on an EC2 instance within a company’s AWS Virtual Private Cloud (VPC), and that agent connects outbound to the company’s Okta tenant. This integration enables the use of AD credentials to access all SaaS apps, with no additional inbound connections to the VPC.

In addition to federated authentication, Okta automates user adds/updates/deletes in downstream systems. This can be done either through a combination of SCIM-based user synchronization or through Okta Workflows which provides a no-code visual designer for more complex user flows. For extensibility, an Okta Workflow can execute Lambda functions to handle even the most complex flows.

Goal: Expanding access to AWS SSO and other AWS services

For companies with user groups outside of AWS Managed Microsoft AD, the Okta Universal Directory can provide a single aggregated directory (Managed AD, or on- premises AD, LDAP, or HR systems) from which to control access to AWS SSO and other AWS services. This is done by connecting Okta and AWS SSO via SAML.

Connecting applications to the Okta Identity Cloud has an additional benefit: Those applications inherit Okta’s MFA. With Okta MFA, companies can mix and match legacy and modern MFA within their environment and centrally manage MFA policies for all resources, including VPN, SaaS, cloud and premises.

Most organizations today include contractors, seasonal workers, or other 3rd parties among their aggregate workforce. In many instances those personnel require only a limited set of applications, or may be accessing those applications from mobile devices or devices not owned by the company. With Okta, these user communities’ credentials can live in Okta alongside those mirrored from AD into Okta. This reduces the security surface area by reducing AD accounts, while eliminating the need for AD client access licenses for these user sets.

Goal: Providing an alternative model for administrative access to servers

Okta Advanced Server Access (ASA) provides secure administrative access to Linux and Windows servers without the need to join those servers to a domain and limiting Client Access License requirements. As users join, move, and leave, and servers’ fleets are expanded or contracted, Okta ASA automates the add/change/delete function of local administrative accounts on Windows and Linux servers and mints tightly scoped certificates for each user session.

As companies expose digital experiences to customers and partners, they need a highly secure authentication experience in place, complete with self-service password resets, multi-factor authentication, etc. Many companies initially leveraged Microsoft Active Directory for their user communities, but are looking to make a change for performance, scalability, flexibility, and many other reasons. Okta’s Universal Directory is built to handle these user communities and their unique requirements. Okta’s functionality can be plugged into a customer’s existing environment in a number of ways, allowing for customer-branded, simple and secure experiences. 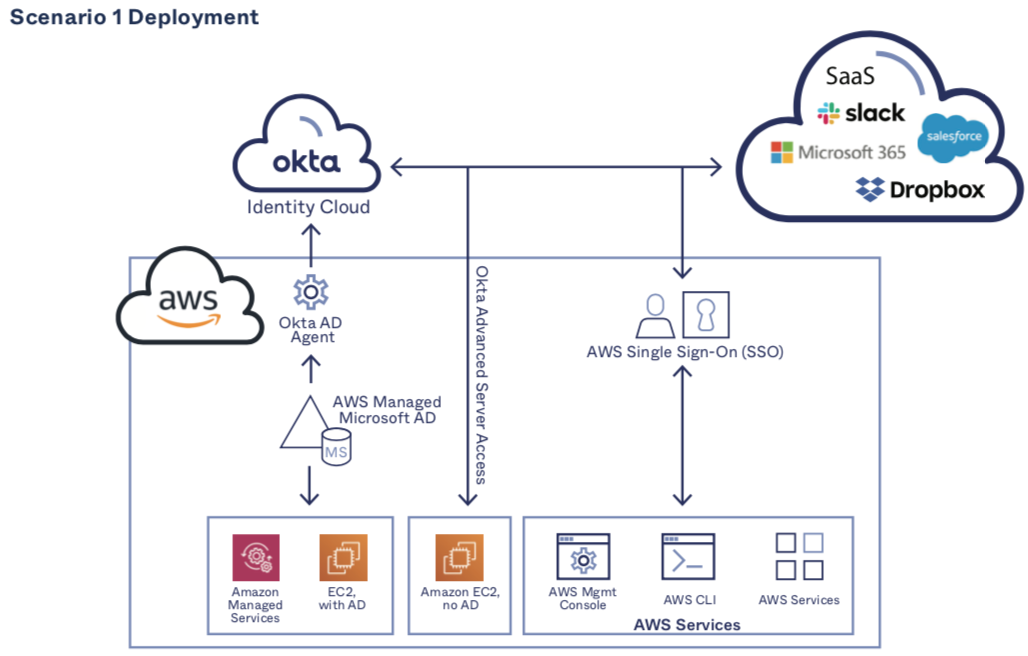 In this scenario, organizations with legacy, premise-based AD instances are extending their AD environment into AWS in support of workload migration to the cloud or to support the use of AWS services like Amazon RDS for SQL Server and Amazon WorkSpaces. Customers extending their existing AD infrastructure to AWS via AWS Managed AD are typically doing so to solve challenges like these:

Adding Okta to this kind of deployment can help further all the goals named in Scenario 1 above, as well as the following:

Goal: Limiting AD sprawl for companies looking to leverage AD only where required

Certain workloads require AD, and AWS Managed Microsoft AD handles these use cases. In cases where AD is not required, though, many companies would prefer to take a modern approach to identity and not deepen their legacy dependency any further. This is especially true for new workloads being developed, where a modern, federated approach is often preferred. In cases like these, Okta manages these workforce identities without adding to AD resource utilization or extending legacy dependency.

Companies migrating to the cloud will typically operate in a hybrid model for a number of years, as many workloads may not be worth migrating. (For example, if the plan is to EOL them in a medium time horizon, or if they are only utilized by a very small user community.) For cases like these, the Okta Access Gateway is Okta’s bridge from the cloud into the data center, seamlessly connecting users to workloads running on premises. The Access Gateway supports header-based authentication and protocol translation to provide familiar and secure access to many applications, like the Oracle e-Business Suite. Once on-premise applications are connected to Okta, those workloads can be migrated to the cloud with no change in the end user access experience. 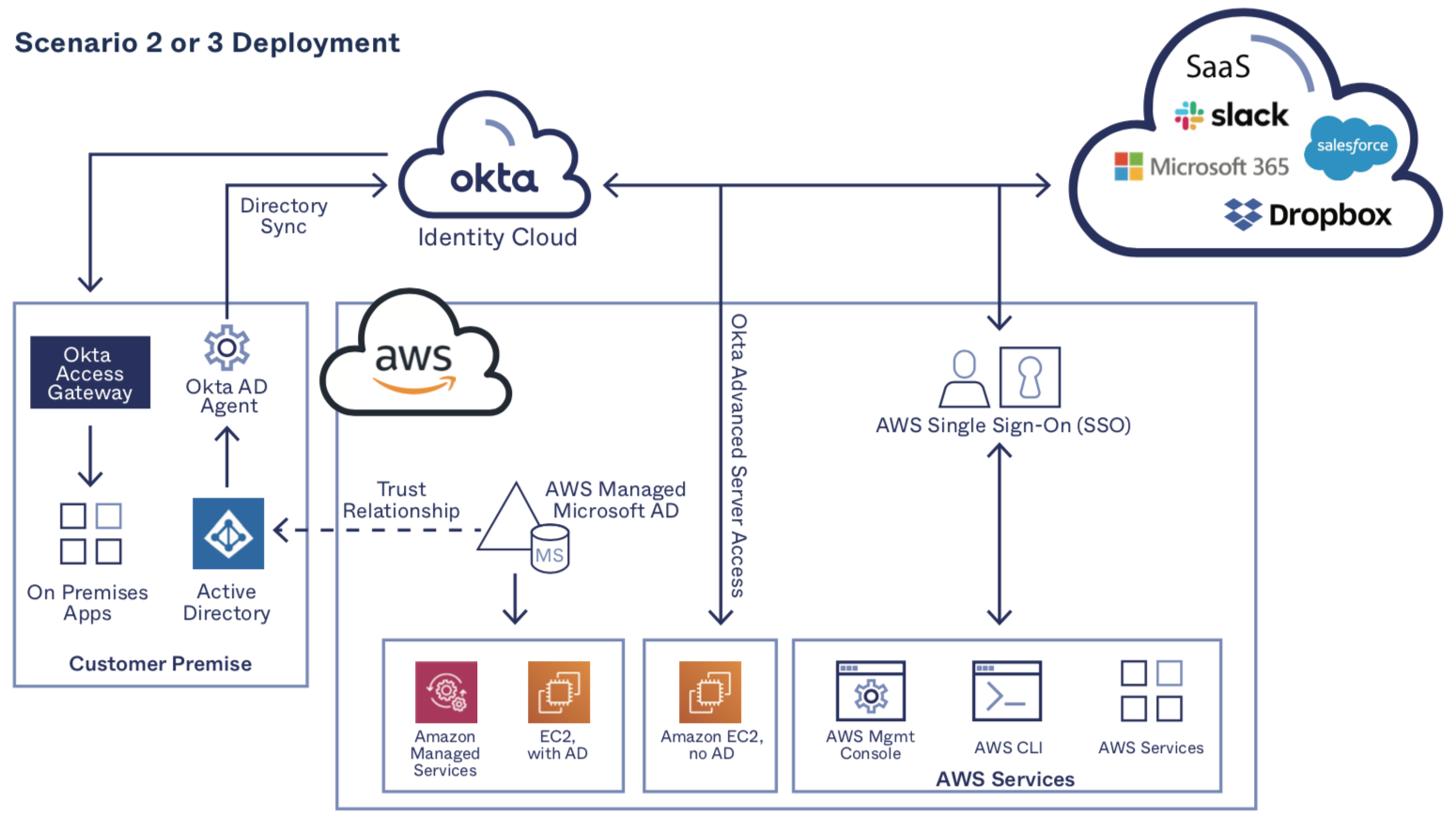 In this scenario, a customer is already using the Okta Identity Cloud, and has made the investment in cloudifying their identity infrastructure. The majority of customers are using Okta to abstract identities away from Active Directory, connect all SaaS to Okta, and automate user lifecycle management with Okta. And many of them are also using the Okta Access Gateway to expand access through Okta to premise-based applications as well.

For customers in this situation, adding AWS Managed Microsoft AD to an Okta deployment can help with goals like the following:

The Okta Identity Cloud provides user access to Windows instances, as described above. Okta does not provide an alternative to AD Group Policy Objects for OS policy management, but AWS Managed Microsoft AD provides the infrastructure to satisfy this requirement.

In support of key customer requirements, AWS has managed versions of key directory- aware services, including:

These services are designed to leverage Active Directory and can be integrated seamlessly with AWS Managed Microsoft AD.

Goal: Supporting migration of AD-dependent workloads to the cloud

Beyond the operating system itself, many workloads—particularly Microsoft workloads like Microsoft SQL Server—are most easily managed by administrators through domain accounts. By leveraging a trust relationship from the Managed AD domain back to a company’s primary domain, this familiar access can be provided.

Beyond administrator access, there is a limited set of applications that require direct integration with AD for user authentication, e.g. Amazon WorkSpaces. By having both Okta and AWS Managed AD, users maintain a single set of credentials and access is simple, seamless, and secure.

Okta is the leading independent identity provider. The Okta Identity Cloud enables organizations to securely connect the right people to the right technologies at the right time. With more than 7,400 pre-built integrations to applications and infrastructure providers, Okta provides simple and secure access to people and organizations everywhere, giving them the confidence to reach their full potential. More than 10,000 organizations, including JetBlue, Nordstrom, Siemens, Slack, T-Mobile, Takeda, Teach for America, and Twilio, trust Okta to help protect the identities of their workforces and customers. To learn more, visit okta.com.