Morgan Stanley came out with a their latest research report on cloud computing. It’s a 100+ page document – plus four pages of disclaimers and disclosures! – so in the interest of time, I’ll take you quickly through what I think are top ideas worth discussion. Key takeaway? It's a new world and cloud is here to stay. 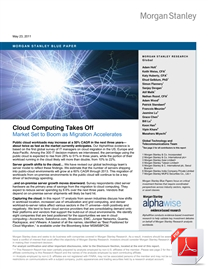 - Economics in the Cloud Market: People often think of moving to "the cloud" as

porting existing IT services and applications to their IaaS, PaaS, SaaS equivalents. What they’re missing is that this shift toward cloud technology – coupled with economics – enables new products and solutions that were never before possible. That’s what’s making the overall market opportunity much larger.

Think back a few years to when relational databases first appeared. Developers recreated transactional apps form the mainframe and mini computer era – in areas like Accounting and Human Resources – to run on these new database platforms. It was only later on in the cycle that analytics and data warehousing came about that people had new insight, unavailable previously. In a sense, we’re seeing history repeat itself - in a very good way.

- Moore’s Law Still in Effect: Virtualization and Moore’s Law continue to allow the industry to run massive workloads efficiently. What does that mean? Fewer new servers.

- Hardware Hurts: As the cloud moves forward, companies selling server hardware to enterprises (for example Dell and HP) are in for a world of hurt. These enterprises are either consolidating servers with private clouds or moving workloads to public clouds. On the other hand, high-volume, low-margin hardware suppliers to public cloud companies like Amazon will do well.

- The Rising Value of Storage: Even though cloud technologies can run more workloads on fewer servers, the need for storage continues to rise strongly across the board. After all, those cloud apps need somewhere to store data.

- The Prognosis is Good: Public cloud growth will be stronger and longer lasting than people are expecting…despite the mounds of buzz and investor interest already. Morgan Stanley is forecasting public cloud workload to double over the next three years. I like the sound of that.

- PaaS is a $50+ Billion Market. No wonder everyone seems to have a PaaS offering.

- Microsoft a Force to be Reckoned With in the Cloud: In the Morgan Stanley survey of IT buyers, Microsoft performed best of vendors most likely to be used in cloud environments. While this is far from the unexpected, we in Silicon Valley tend to underestimate the power the company still holds – especially during the last few years. The fact is that they continue to have big time mind share of the IT buyer, with millions of developers worldwide writing .Net and Visual Basic and investing in cloud technology.

- Cloud is not an Island: People often think of "cloud" as just a software transformation. But the report makes it clear that mass move to cloud computing is happening and impacting all IT industries. That includes IT services (Accenture, for example) to semiconductors, networking equipment and telecommunication services, among other areas. It’s the ripple effect and it’s being felt everywhere.

Cloud is changing the rules of the game, and here at Okta, we truly believe that. This recent research is just more fuel for the fire. Agree? Disagree?