Next up in our Oktane16 reveal series is Adam Savage, co-host and executive producer of Mythbusters! Adam will be closing our Oktane16 conference with a summary of how a fascination in science has propelled him in life and how to leverage curiosity to achieve greatness. Adam will finish his session with his favorite memories from Mythbusters and answer questions from attendees.

Adam has worked as a special -effects artist, fabricator, modelmaker and general dreamer- upper for a decade and a half, working on films such as Galaxy Quest and the Matrix sequels, as well as Episodes I and II of the Star Wars series. For 14 seasons on Mythbusters, Adam and co-host Jamie Hyneman drove science education by busting pop culture myths.

Adam will bring his unique sense of humor to the Oktane16 stage on Wednesday, August 31! Don’t delay - early bird registration pricing of $695 expires May 31. Secure your spot at Oktane16 and join thousands of IT pros, cloud engineers, developers, and industry experts.

Stay tuned: we have more guest keynotes to announce that will be joining Brian Krebs, Rainn Wilson and Adam Savage on stage at Oktane16! 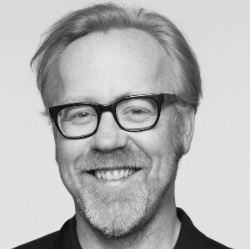