Nexteer Automotive is a US $4 billion Tier 1 supplier to Ford, GM, and other automotive manufacturers. Although Nexteer was formed from a 2007 divestiture from Delphi Steering, its origins date back to 1906. From its earliest innovations in mechanical power, assembly line production, to computer automation, Nexteer is now building internet-connected physical systems.

Automobile component manufacturers face pressures of global competition and rising customer demand. These pressures can only be met through digital transformation—but only about five percent of manufacturing executives are satisfied with their digital strategies. Nexteer is tackling a whole new level of security challenges—including more locations, suppliers, and an interdependent supply chain—all with connectors into Nexteer’s network. Every point of entry into Nexteer needs to be secured, including access by employees, OEM business partners, suppliers, and contractors.

Nexteer’s chief information security officer, Arun DeSouza, conducted an enterprise risk assessment shortly after joining the company. Some of the key areas of focus he identified included loss of intellectual property, cloud computing governance, secure employee onboarding and offboarding, and network security. DeSouza knew that connecting more devices and systems to the internet would raise the organization’s risks of data breaches. With Europe’s General Data Protection Regulation (GDPR) now in effect, privacy is also a major concern for companies doing business in Europe. Depending on the severity, GDPR can penalize two to four percent of a company’s revenue. Nexteer is taking these risks seriously with a measured and responsible approach toward digital transformation.
To increase productivity and innovation, Nexteer chose to adopt a common set of cloud applications across the organization, including Office 365, SAP SuccessFactors, Concur, DocuSign, and Salesforce. They needed to minimize risk by automating user lifecycle management, and reduce threats by integrating security elements across applications, services, and infrastructure. However, Nexteer was globally dispersed, and had a disjointed IT infrastructure with multiple software tools being used in different locations. To adopt a “One Nexteer” focus across their entire organization, DeSouza wanted to consolidate the technologies down to those that worked seamlessly together, and enabled cloud transformation.
After its divestiture from Delphi Steering, part of Nexteer’s IT assets included a carved-out portion of Delphi’s old Active Directory, which needed to be stabilized. DeSouza worked with Microsoft to restructure their Active Directory for better performance and security. Then, he broke down Nexteer’s strategy into three phases:

The company’s restructured Active Directory now serves as the foundation for identity across the entire organization. DeSouza and his team conducted a proof-of-concept evaluation of Okta’s Enterprise Lifecycle Management and Single Sign-on integration with Active Directory. After Okta met the success criteria, Nexteer acquired the Okta Identity Cloud.
Now end users authenticate once (using their Active Directory credentials) and get federated single sign-on for about 15 enterprise cloud applications as well as some custom applications. Additionally, IT admins have privileged access to IT services and infrastructure. Okta manages it all based on Active Directory identity and group policy.

Office 365 was one of the first applications to be provisioned across the 7,000 knowledge workers at Nexteer. Compared to their earlier email and collaboration suite, Office 365 scales well to support adding new users through mergers and acquisitions. It also reduces costs by eliminating the need to purchase separate point products, like web conferencing. Choosing Okta, instead of a traditional identity federation solution, for Office 365 helped the company deploy faster and achieve security and privacy compliance for regulations like the GDPR.

Nexteer IT installed and connected Okta to Office 365 within minutes. They tested and deployed components of Office 365 to over 7,000 users in four stages—starting with Yammer, then Skype for Business, OneDrive, and finally email. 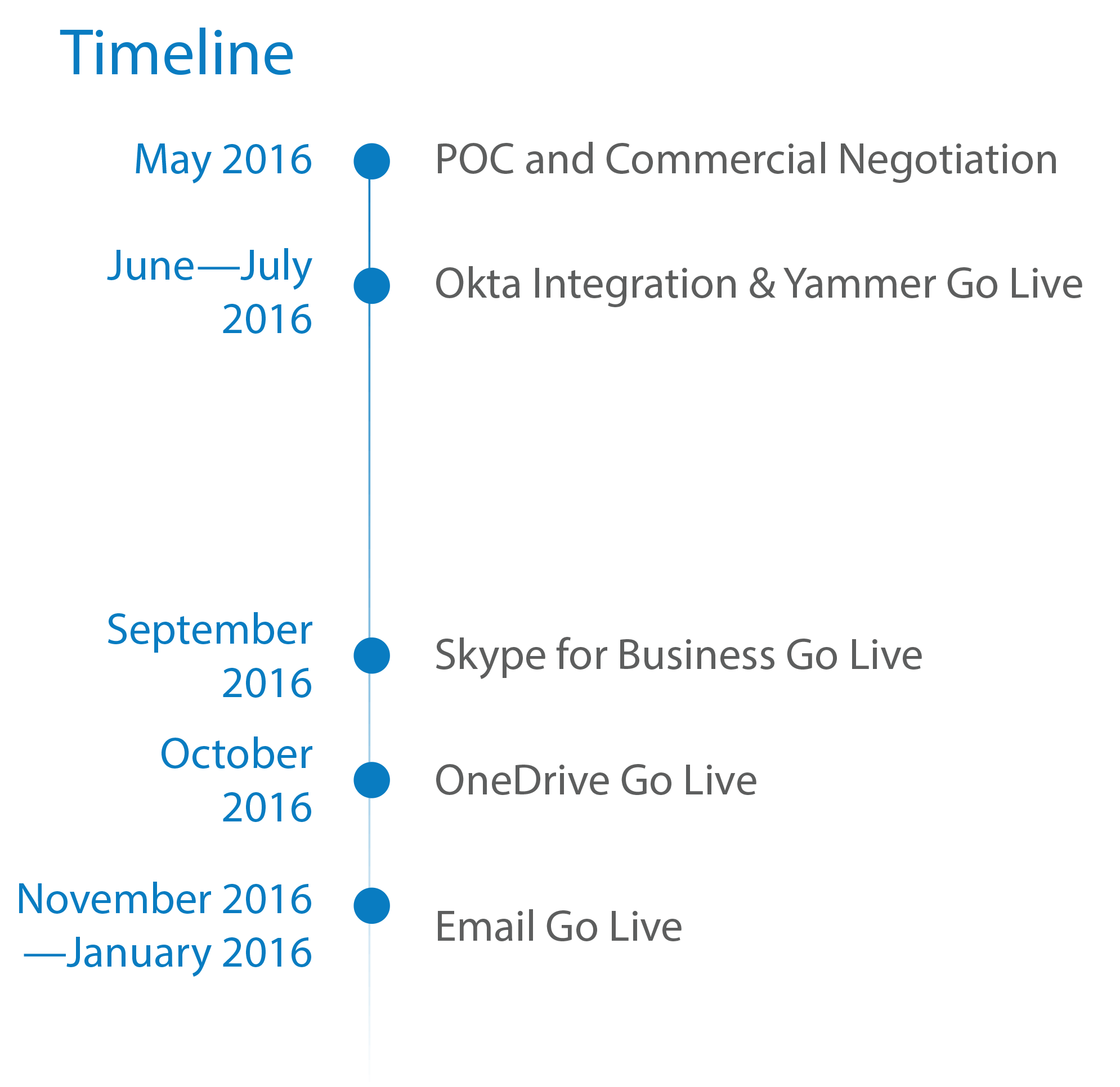 "With Okta’s automated provisioning, we were able to power through the Office 365 integration in a day or two.”
—Arun DeSouza, Nexteer CISO

Nexteer onboards a large number of employees on a regular basis. With this in mind, they sought an automated user lifecycle management system to:

3) Accurately deprovision users when they leave the organization

Instead of relying on IT to manage the user lifecycle, Nexteer wanted to take advantage of  SAP® SuccessFactors to start the onboarding process. SuccessFactors was already being used by the company’s Human Resources department. Now it was time to take SuccessFactors to the next level—by integrating it into the IT workflow using Okta’s Lifecycle Management.

But even with a powerful human capital management (HCM) tool, the onboarding process for new hires can still be painful—often requiring the IT department to manually respond to a ticket and create accounts in apps and systems for each new user. It has also been difficult for IT to synchronize HR user records between Active Directory and enterprise applications. This challenge increases as more people join the organization, change job roles over time, manually update their own information, and leave the company. Okta’s integration with SuccessFactors ensures that Nexteer’s HR department can drive the entire employee lifecycle from onboarding, to role change, to offboarding.

In the past, using native tools, Nexteer IT needed days or even weeks of effort to complete all the tasks required to onboard a new employee. Now, Okta is the hub for identity between Active Directory and SuccessFactors. Nexteer’s IT teams can ensure the right people are automatically provisioned for the right set of applications and services. The only manual intervention is when Human Resources enters a new employee’s information into SuccessFactors, and when IT receives the automatic workflow request to create their user account in Active Directory. All other attributes in Active Directory are populated automatically: Okta’s pulls information from the employee’s HR record in SuccessFactors and populates Active Directory group memberships and permission levels based on their organization and role.

Using Okta Lifecycle Management, Nexteer IT can automatically disable a departing user’s account in Active Directory, immediately revoke all access to cloud applications and Office 365 email, and pull and reassign Office 365 licenses. Alternately, an HR manager may go into SuccessFactors and change the employee status to “Terminated” or “Inactive”. Okta reads either action and synchronizes information so that Okta, SuccessFactors, and Active Directory all have the same information.

Nexteer’s security model is based on three broad layers: Application Security, Services Security, and Infrastructure Security. They rely on Okta to tie identity into every layer—from application security, authentication and identity management, and security monitoring. To strengthen email, web and infrastructure security, the company also utilizes services from Proofpoint and Zscaler.

Proofpoint secures Office 365 email, and provides anti-malware and encryption services, while its threat intelligence prevents, detects and notifies Nexteer of threats spanning email, network, mobile apps, and social media. The security team gets the visibility and intelligent reporting they need to filter through the noise and respond quickly to real incidents.

Without Okta, synchronizing users and groups into Proofpoint required either manual updates, or a custom application built on the Microsoft Azure portal. Using Okta as the identity hub has increased the efficiency and automation for Proofpoint’s email protection, while reducing the attack surface for the organization.

Figure 4. Okta is the hub of Nexteer’s identity architecture

Scaling Security for the Cloud with Zscaler + Okta

As Nexteer began to move to the cloud, they found their traditional hub and spoke architecture couldn’t handle the sudden spike in cloud application traffic. Their on-premises internet gateways and security appliances were designed to provide real-time visibility, traffic inspection, threat protection, and URL filtering for all internet traffic—but could not support direct-to-cloud connections. Backhauling cloud traffic through on-premises device proxies was slowing everything down. DeSouza realized that he could no longer fix the problem by adding more hardware. Instead, he needed to find a security platform that was built for the cloud.

Zscaler made it possible for Nexteer’s knowledge workers, some who travel extensively, to access their cloud applications from any location without performance lags. Traffic is no longer forced through the company’s on-premises internet gateways and security appliances. Zscaler helped Nexteer to add or remove branch offices with greater ease and speed than if they had been using device proxies in their data center.

Slow performance in Office 365 is why Nexteer turned to Zscaler in the first place. The initial data migration from on-premises Exchange servers to Office 365 had been choking the network. Post-migration, the situation wasn’t much better. Each user’s Office 365 client software opens from 20 to 30 connections to the Office 365 platform, causing performance lags—especially when traffic isn’t routed to the closest Microsoft data center. Since deploying Zscaler with Okta, end users get a fast and secure connection to Office 365. Okta manages end-user access to Office 365 through a combination of single sign-on and multi-factor authentication. Zscaler manages the connections and dedicates 40 percent of Nexteer’s bandwidth to handle Office 365 traffic.

Zscaler and Okta, Better Together

As part of the Okta Integration Network, Zscaler relies on Okta to provide information about users and how to enforce group level security policy—such as which groups of users should have access to which apps, or which groups are authorized to send sensitive customer information over the internet. While originating user records are created SuccessFactors, Zscaler relies on the centralized identity data from Okta to enforce security policies.

Nexteer’s vision is to connect everything: users, digital factories, and Internet of Things (IoT) enabled devices. While adhering to their original investments in Active Directory, the company accomplished a complete cloud transformation across their entire organization. They chose Okta to enable this transformation—because it simply worked.

“After spending two weeks trying (and failing) to connect Active Directory to the cloud using ‘traditional methods,’ in the span of four hours, we connected everything to Okta,” DeSouza said.

Blending strong security with high usability is key for Nexteer. Knowledge workers need the right tools and easy access to get their jobs done, no matter the location. The company needs to know that every point of entry into their organization is secured, and identifiable. For Nexteer, Okta is the lynchpin that holds all aspects of security together.