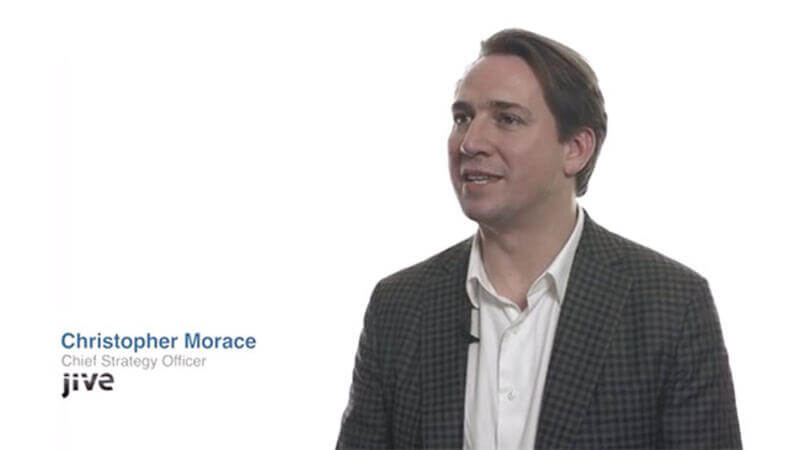 Christopher Morace:  Jive is a leader in the social business space. So we basically give a new way for enterprises, primarily, to communicate and collaborate that goes beyond the email and SharePoint and some of the solutions they would be used to.

So we had a huge challenge around solving access and identity problems. Even initially, just single sign-on, in general, right? 'Cause any friction in there would cause people to get frustrated with the solutions they were trying to use. We started doing thing by having services implementations go and manually string these systems together and then we started seeing different customers use Okta as their solution of choice and we got more educate on what people were doing and realized it solved an awful lot of problems for us.

And we had a go to market partnership with Box that we launched at the beginning of the year and we started using Box as our own solution and Okta was the way we solved the problem of making the two things seamlessly work together. And so, from that point on, it kind of became a no-brainer.

So we selected Okta, I mean, obviously, it solved a real pain-point, but in general we believe we're entering a phase of innovation in this space where people are going to replace their old systems and it's going to be a best-of-breed type of choice. We picked Box 'cause we thought they were the best content solution for the enterprise. We picked Okta 'cause they appear to be the clear leader in the space. And the evidence of that was, we saw them being adopted more in our customer base, and when you see that an you kind of look at the type of company it is, who the investors were, it gets you pretty comfortable that you're picking someone that's going to stick around for a while and be the solution people choose.

One of the things we're doing with Okta is we're actually embedding it in the Jive platform. So, you get the initial Okta functionality out of the box with Jive. I think part of our intent is largely that, we want to give a seamless solution to our customers and it's pretty rare that anyone will ever implement a Jive and not need something like Okta, and so we want to make it as easy as possible for our customers.

We're solving a larger problem for people now. I think, before, we were seeing the enterprise experiment with what potentially were better solutions for the way we work and now, when things are working in concert together and Okta really was the thing to bridge these things together. That's more compelling to any company, because you can ask replace old stuff, you can move to the future as opposed to just layering new things on.

And one of the things I really love about Okta that lines up with Jive is, we're trying to enable these large enterprises to move to the future. They're not going to throw everything out immediately, and so you have to bridge across the firewall. So, I think the combination is really powerful together. I think, you know, I don't know that any of our customers will ever buy Jive in the future without Okta bundled into it.

Jive works in the social business space as a way for enterprises to communicate and collaborate beyond email, sharepoint and other solutions. Jive was finding they had a problem with access and identity problems, and found that many of their clients were using Okta as their identity management solution of choice. Once they integrated Box as a solution, integrating Okta was a no brainer. Now, It’s rare that a prospective client would ever select Jive and not need a solution like Okta, which is why Jive is thankful to have teamed up with Okta. They are both moving forward and providing solutions for other enterprises that can replace old communication and management tools, rather than piling old tools on top of other old tools.