A Deep Dive Into Okta FastPass

This blog post is the second in a series focusing on credential phishing. Previously, in the blog The Need for Phishing-Resistant Multi-Factor Authentication, Mukul Hinge explained how threat actors are becoming more sophisticated, using various tools to overcome mitigations. Today’s post digs into the inner workings of Okta FastPass, explaining how it serves to provide strong phishing resistance and device assurance.

It’s been about eight months since we made Okta FastPass generally available (GA) to all Okta customers on Okta Identity Engine (OIE). Okta FastPass is deployed at scale, and organizations see over 4 million monthly passwordless authentications. Okta customers like Intercom, Rubrik, and NTT DATA have enabled this frictionless passwordless experience for their end users.

What is Okta FastPass?

FastPass is a cryptographic multi-factor authenticator that provides passwordless authentication to any SAML, OIDC, or WS-Fed apps in Okta. It is a device-bound authenticator, meaning it can only be used to authenticate applications on the same device. Okta FastPass provides strong security across multiple user devices, on any operating system platform, at a far lower cost than deploying roaming hardware authenticators. It is available on Windows, iOS, Android, and macOS platforms, ensuring that end users on any device can get seamless, phishing-resistant access to apps and resources.

But to see it in action, watch this short video and demo on the Okta FastPass page.

Okta FastPass users love a phishing-resistant, passwordless, consistent experience across platforms. Okta FastPass only requires one enrollment per device, which can be driven through the first authentication, and integrates seamlessly with the biometric capabilities on the supported platforms (including FaceID, Windows Hello, and fingerprint sensors, to name a few). This provides additional security and reduces the dependency on out-of-band factors such as OTP and push notifications.

IT Admins can sleep well at night knowing that:

How does Okta FastPass work?

The Okta FastPass journey begins with an enrollment (or adding an account) process on the Okta Verify app of your device.

This process is easy and fast, yet multiple ways exist to complete the enrollment. One of the easiest ways to enroll is inline enrollment. Admins can deploy the app to the end-user devices, and users will be able to enroll as part of their normal authentication process!

In another method, If you are already authenticated on a desktop device, you can generate a QR code to scan from your mobile device, complete enrollment, and begin the FastPass journey.

But suppose you are on a desktop device or enrolling for the first time? In that case, you’ll need to authenticate using another method (for example, email magic link, SMS for true passwordless, or password—if your organization is still using them). Okta provides several ways to ensure that first-time user activation is secure for admins. For example, admins can pre-enroll users in SMS MFA prior to activation.

Behind the scenes, and when available, Okta Verify generates public/private key pairs using the device’s Trusted Platform Module (TPM) and sends the public key along with some device context metadata to Okta servers. The private key remains securely stored in the device’s TPM. Here is a data flow diagram of FastPass enrollment: 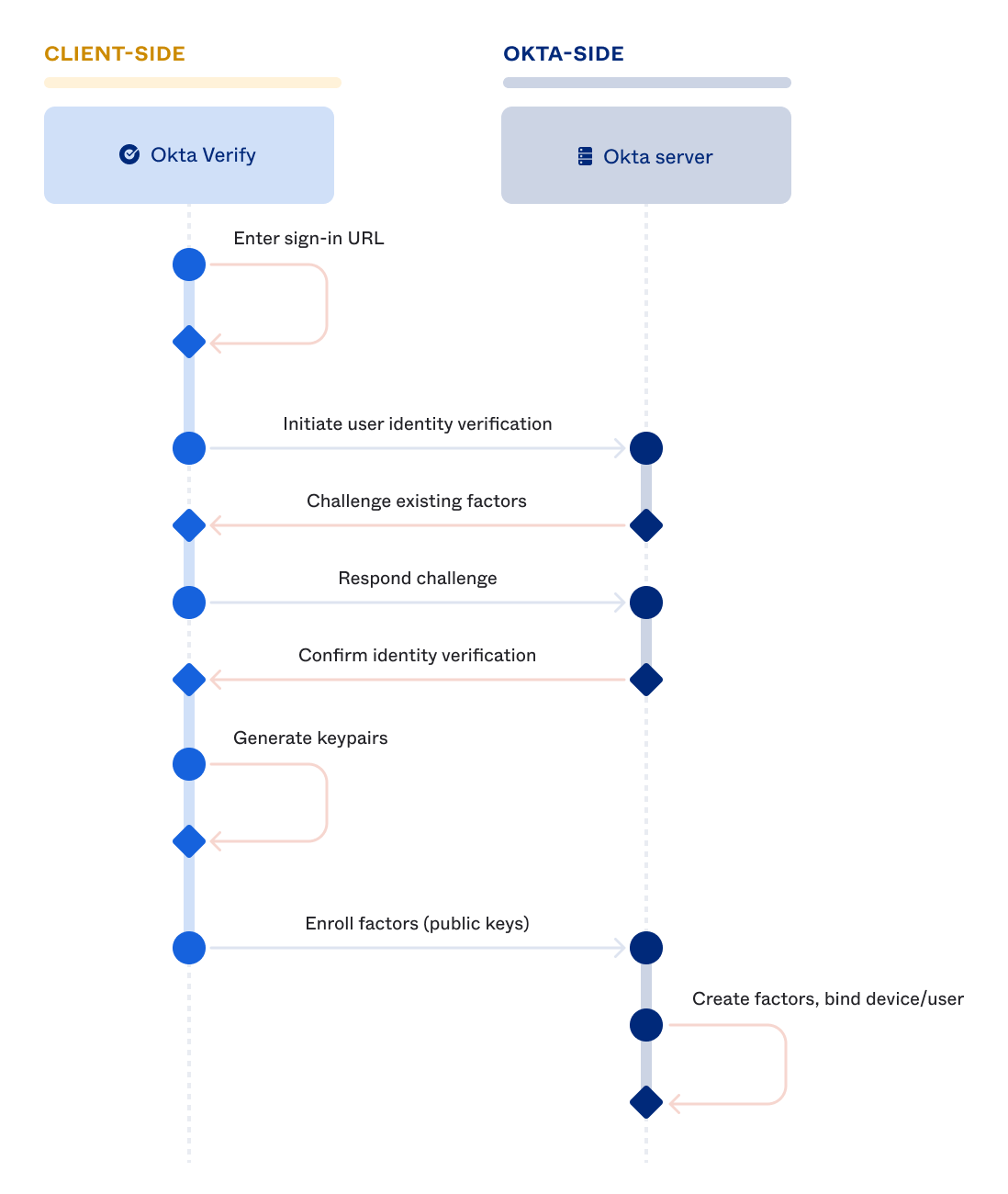 Below are screenshots of FastPass enrollments in the Okta Verify app on macOS and iOS devices. 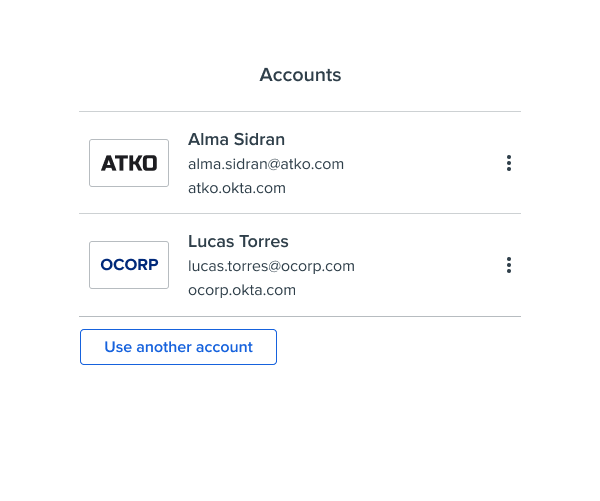 To support multiple platforms and provide a consistent user experience, Okta FastPass uses numerous ways to perform authentication, known as probing schemes on various platforms. There are two broad categories of probing schemes. “Silent probing,” where the Okta Sign-In Widget automatically checks if FastPass is configured on the device, can be used to authenticate the user. “Interactive probing” occurs when the user clicks the Sign in with Okta Verify button. FastPass always tries silent probing before falling back to interactive probing.

Below are the various probing schemes FastPass uses:

Okta Verify runs an HTTP server on the device on a local host port that listens and responds to probing requests from the Okta Sign-In Widget.

For example, when you log in to an app protected by Okta, you will be redirected to the Okta Sign-in Widget for authentication. The Okta Sign-In Widget silently interacts with the Loopback server.

The Loopback server sends a challenge signed with the private key along with the origin domain and device context signals, which the server can verify. If the policy conditions are met, the Okta backend will generate a SAML assertion (or OIDC access token) and redirect the browser to the service provider. 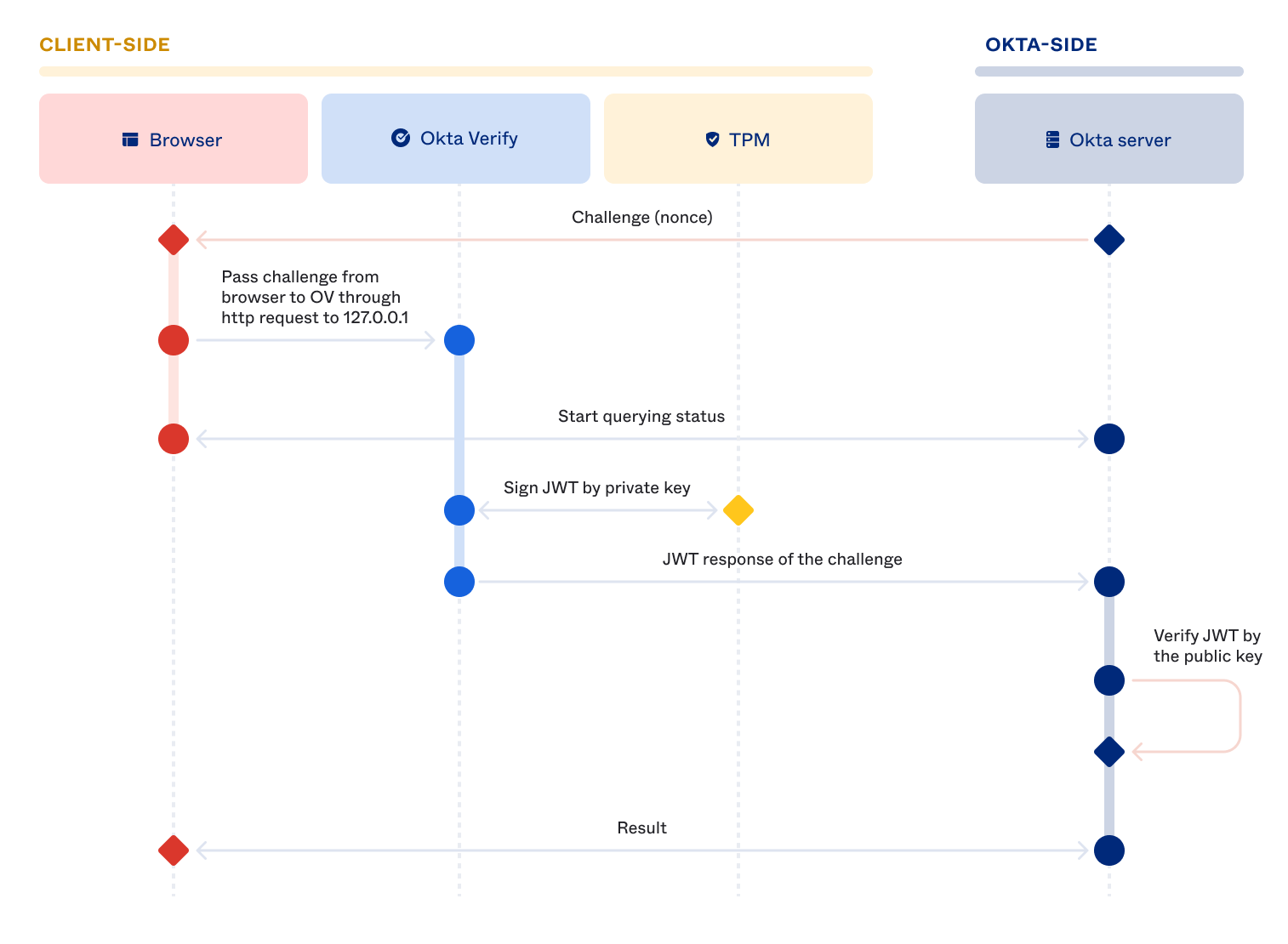 This probing scheme is available only on Apple devices managed by an MDM provider on the Safari browser. It leverages Apple’s Extensible Single Sign-on framework. It involves configuring the SSO Extension setting on the MDM provider console to push an MDM profile to the end-user devices. Apple’s SSO framework then invokes the FastPass SSO extension for the HTTPS requests going to the configured domain, for which the FastPass can dynamically generate headers and sign. Check out the documentation for configuring the SSO FastPass experience on iOS and macOS. 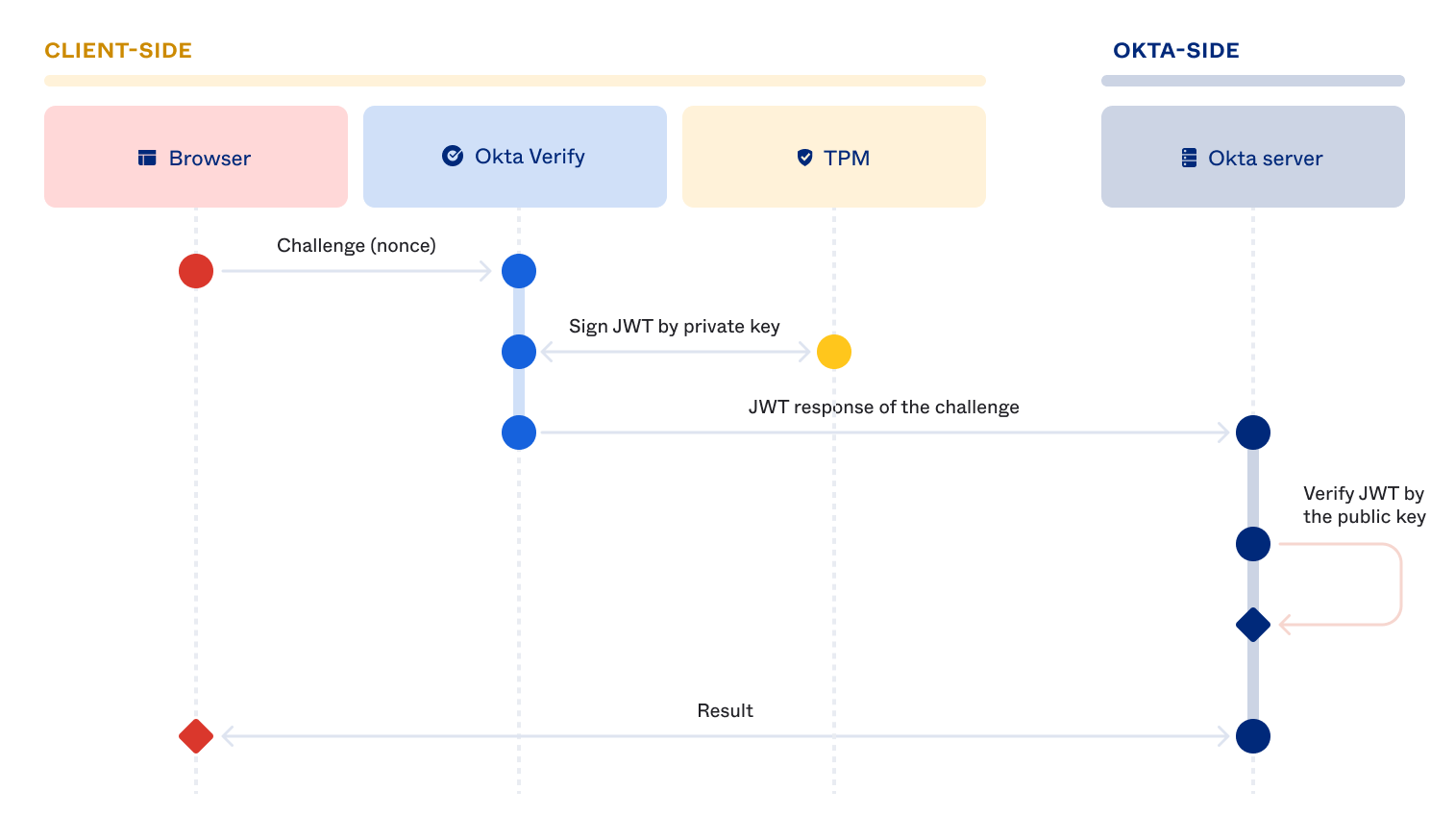 App Link, Universal Link, and Custom URI are platform-provided app launching mechanisms with deep linking capabilities in Android, iOS, and macOS, respectively. During the authentication flow, the Sign in with Okta FastPass button on the Okta Sign-In Widget leverages these platform-provided features to launch the Okta Verify app along with the challenge request for FastPass to process and authenticate.

Device assurance policies allow administrators to control access to company resources. They can be created once and reused in multiple authentication policy rules. Here is a screenshot of a device assurance policy that ensures the Android OS version is 12 or higher, the user has setup password and biometric, and the device is not rooted. 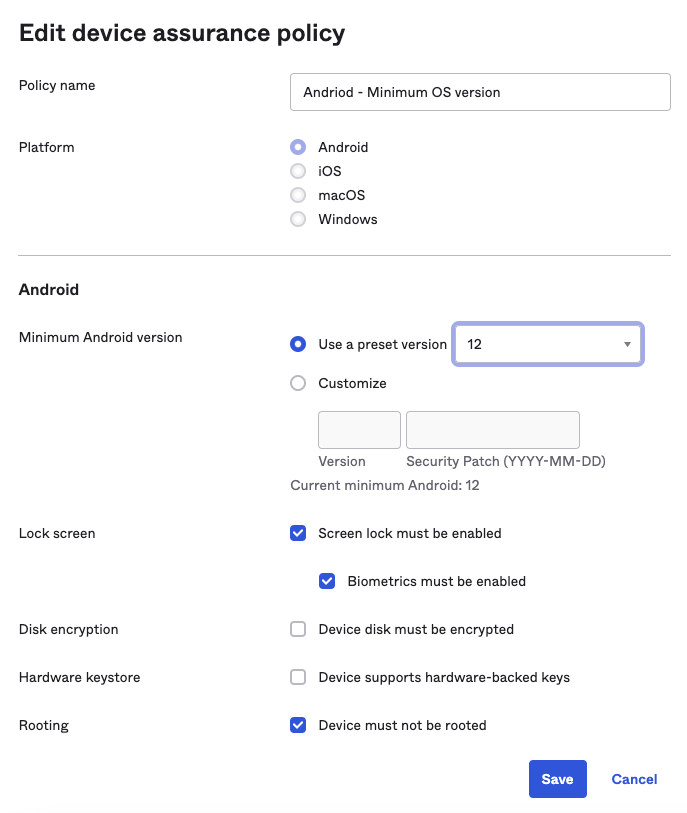 Additionally, we have added a health check screen to Okta Verify, which alerts users about their device posture and recommends corrective actions. 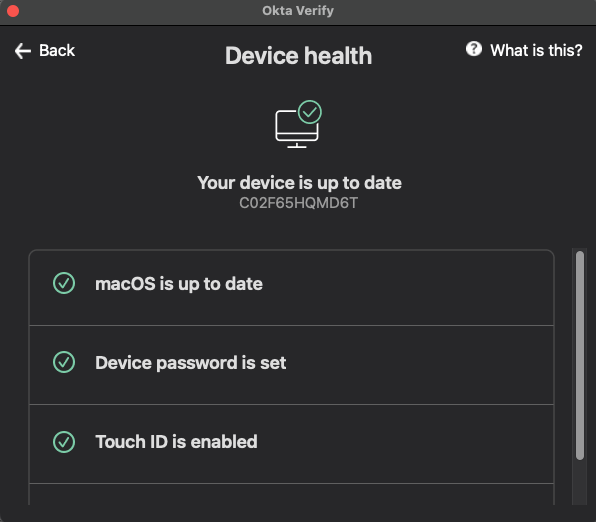 The below diagram shows how Okta’s Loopback server binding helps in preventing phishing attacks involving an adversary in the middle attack using a proxy server such as evilginx. 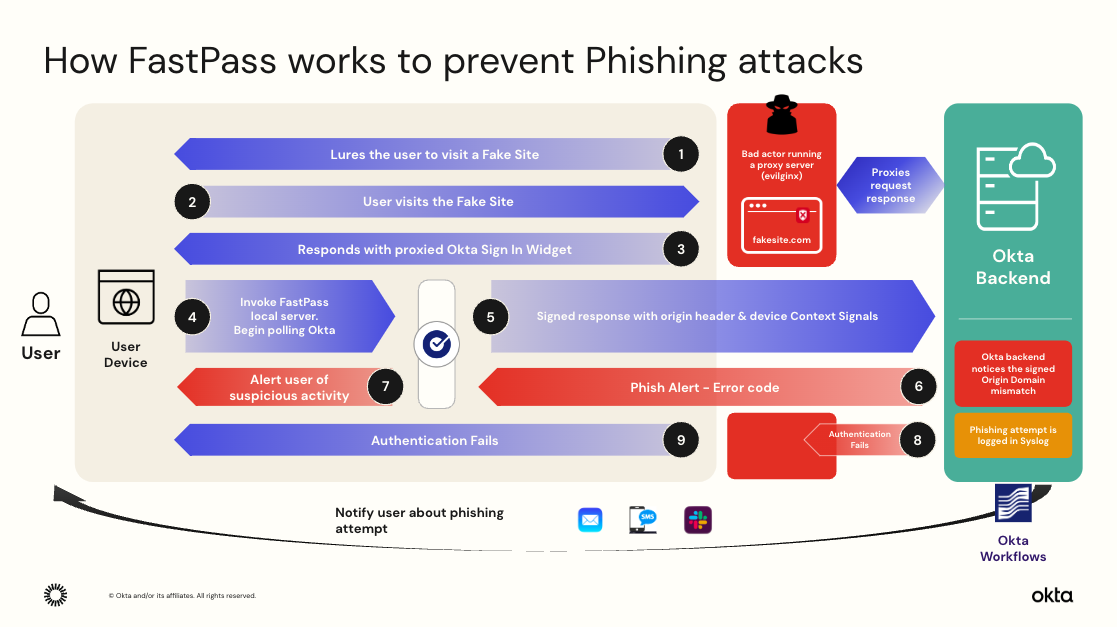 Since Okta FastPass includes the origin header in the signed response payload, Okta can easily detect the domain mismatch throw and alert administrators and end-users, in addition to rejecting the authentication request.

Admins can use Okta Workflows to alert the end-user through a back channel such as Slack or email or to take other actions such as blocking traffic to and from the phishing site.

Combining this with device assurance policies, Okta can provide strong protection from other forms of endpoint attacks, such as malware or ransomware. Okta’s partners, such as Crowdstrike and Windows Security Center, can provide valuable signals on the presence of malware on the device, which Okta leverages to enforce strong authentication policies.

For the last eight months, we have been working closely with our customers (both internal and external), listening to their feedback and suggestions for improvement. We have fixed several UX issues and incorporated suggestions to make FastPass even better for our customers. We have hardened our mobile apps (using obfuscation and tamper detection, for example), collected additional device context such as jailbroken or rooted devices, and queried devices for having a passcode, to name a few. This empowers admins to make policy decisions based on device assurance levels. This is especially important for BYOD scenarios.

To sum it up, FastPass provides robust, seamless, frictionless, and phishing-resistant authentication to the end-users while delivering peace of mind and cost savings for companies.

Take the next step:

As a Senior Engineering Manager at Okta, Chandra Shirashyad is responsible for ensuring customers achieve maximum security while providing an easy way for their workforce to access corporate resources from any device. He manages the Okta Verify, FastPass, and Device Assurance teams. He is passionate about security and stays abreast of security trends. Chandra has a bachelor's degree in engineering from India and is currently a Stanford LEAD Executive Education program student. He enjoys biking and golfing in his spare time.