What's the world's most dangerous computer virus? Ask security experts, and most would start talking about Emotet malware.

Attackers created Emotet to steal banking data. But in time, hackers expanded their capabilities and added new features to this already lethal virus. The result was malware capable of theft on an almost-impossible-to-imagine scale.

Hackers also used Emotet to install other forms of malware, as long as someone paid them enough to do so. And Emotet spread rapidly and was almost impossible to detect.

We're talking about the Emotet virus in the past tense because an international group of programmers and law enforcement officials disrupted the scheme in early 2021.

But don't relax just yet.

Emotet has been through multiple iterations, and people have studied its format and functionality. Somewhere, a hacker is likely building a new and better version of this same threat. It's wise to know what to watch for and develop your security plans accordingly.

The history of Emotet

In early 2020, the Cybersecurity and Infrastructure Security Agency called Emotet one of the most costly and destructive types of malware available. By that time, the virus had been in circulation for years. Government agencies were often targets, and each time the virus hit them, cleanup cost $1 million.

In its early versions, Emotet stole banking information. But later versions allowed the virus to:

People made money off Emotet attacks, and a team of professionals administered the malware by running sophisticated servers all around the world. In 2021, officials from the Netherlands, Germany, the United Kingdom, France, the United States, and more carried out an operation to stop it.

During one exciting week, the team gained control of all the servers running Emotet attacks. In essence, officials disrupted Emotet at the source, and they made several arrests in the process.

Without servers to process data and carry out threats, the Emotet threat was effectively eliminated.

How did Emotet malware work?

In January of 2021, right before officials took servers down, Emotet represented 7 percent of all malware infections globally. Everyone was a target for Emotet attacks. If you have an active email account, the virus has likely touched you at least once.

Anything a writer could dream up involving an attachment became an Emotet lure. Victims thought they needed to open those attachments, and when they did, the program asked them to "enable macros" to see all of the information inside.

Allowing macros meant starting the malware machine. Soon, a victim's computer began spreading similar messages to contacts. Emotet also borrowed functionality from WannaCry and other successful internet malware. Soon, it could take over entire networks, as long as one person clicked on an email attachment.

Is the Emotet virus still a risk?

The Emotet botnet as we know it was dismantled in January of 2021. Bad actors who used the attack for years are no longer able to use their servers and systems to find new victims.

But the malware still could infect your system. If a hacker can spot it and manipulate it, you could be subject to a new attack. Ensure that you update the settings on your virus scanner and check your system carefully.

Protect yourself from the next Emotet by:

If you're a system administrator, you have yet more homework to do. Experts recommend:

If you're looking for even more ways to ensure that hackers don't get into your systems, watch our webinar about broken authentication exploits. 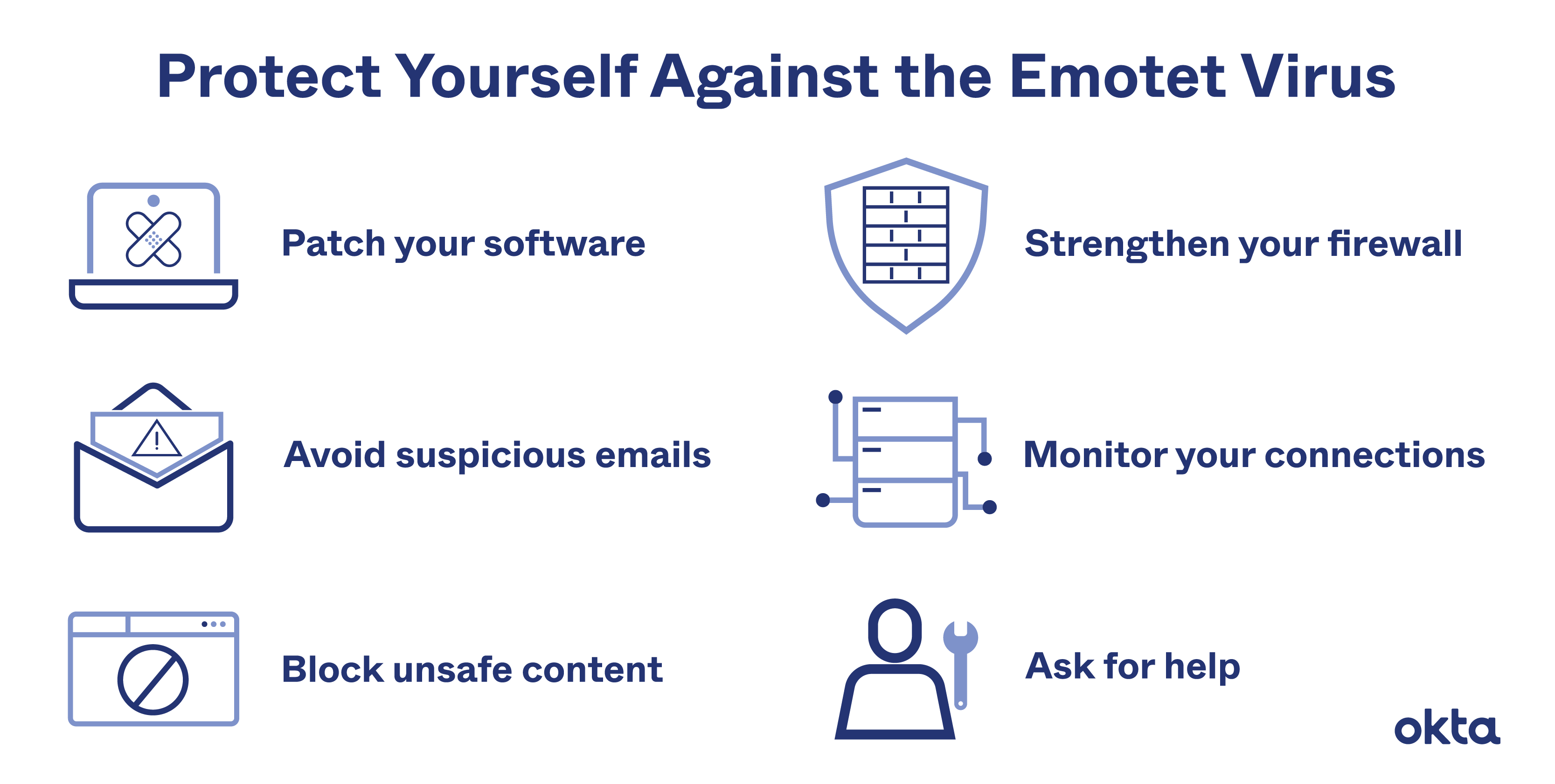 What is Emotet? And How to Guard Against this Persistent Trojan Malware. (April 2019). CSO.