What is an Attack Surface? (And How to Reduce It)

An attack surface is the entire area of an organization or system that is susceptible to hacking. It’s made up of all the points of access that an unauthorized person could use to enter the system. Once inside your network, that user could cause damage by manipulating or downloading data.

The smaller your attack surface, the easier it is to protect your organization. Conducting a surface analysis is a good first step to reducing or protecting your attack surface. Follow it with a strategic protection plan to reduce your risk of an expensive software attack or cyber extortion effort.

An attack surface is essentially the entire external-facing area of your system. The model contains all of the attack vectors (or vulnerabilities) a hacker could use to gain access to your system.

Vulnerabilities are everywhere, and often, they're exploited. For example, in 2014, reporters said nearly half of all Fortune 500 companies had employee email addresses and passwords exposed in hacker forums within the year. 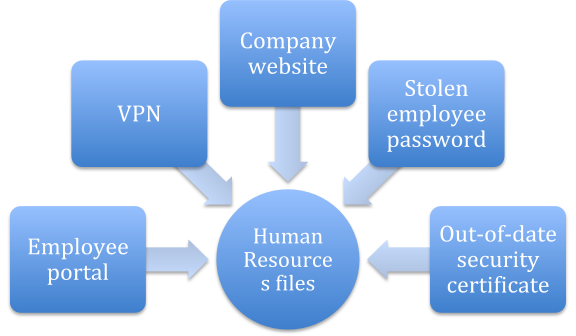 A hacker with that data could move past your firewalls and access:

Once past your firewalls, hackers could also place malware into your network. Spyware could follow your employees throughout the day, recording each keystroke. A ticking time bomb of data destruction could await the next online decision.

What Are Attack Vectors?

Attack vectors are the landmarks on an attack surface. Each one represents vulnerabilities, such as access points, protocols, and services.

You may think you have only one or two crucial vectors. But chances are, you have dozens or even hundreds within your network.

Attack vectors are unique to your company and your circumstances. No two organizations will have the same attack surface. But problems commonly stem from these sources:

Identify where your most important data is in your system, and create an effective backup strategy. Added security measures will better protect your system from being accessed.

Even your home office isn't safe from an attack surface threat. The average household has 11 devices connected to the internet, reporters say. Each one represents a vulnerability that could lead to a subsequent breach and data loss.

If a majority of your workforce stays home throughout the workday, tapping away on a home network, your risk explodes. An employee may be using a corporate device for personal projects, and company data may be downloaded to a personal device.

Each office in which a person works and each device that accesses the network should be assessed.

To reduce your attack surface and hacking risk, you must understand your network's security environment. That involves a careful, considered research project.

Your attack surface analysis won't fix every problem you find. Instead, it gives you an accurate to-do list to guide your work as you attempt to make your company safer and more secure.

Follow this roadmap as you complete your attack surface analysis:

In large companies, this process is measured in months, not hours. Be as thorough as you can. The more you uncover, the safer your company will be.

Mapping guides your cleanup project. Move methodically from the most vulnerable point to the least.

This is a short list that helps you understand where to begin. You may have many more items on your to-do list based on your attack surface analysis.

With immediate cleanup completed, look for ways to tighten your protocols so you'll have less cleanup work after future attack surface analysis projects.

Never underestimate the importance of reporting. Even when you've taken all of these steps, you must monitor your network regularly to ensure that nothing has broken or grown obsolete. Build time into each workday to assess the current threats.

To learn if you’re protecting your company, view our checklist: 12 Key Steps for Protection Against Data Breaches.

The Proposed Solution. (2015). How to Defeat Advanced Malware.

U.S. Households Have an Average of 11 Connected Devices, and 5G Should Push That Even Higher. (December 2019). Variety.

Beware This Sinister New ‘Dark Side’ $1 Million Cyber Threat, You Must. (August 2020). Forbes.

Why Every Small Business Should Care About Cyberattacks, in 5 Charts. Vox.

Why Is Cloud Security So Important?

To learn if you’re protecting your company, see our Checklist: 12 Key Steps for Protection Against Data Breaches.

Fill in the checklist