Re-Inventing the Roles of IT and Technology in the Enterprise

We recently hosted a CIO panel with four IT leaders to discuss the evolving role of IT amid the pressures of mobile and cloud adoption in business today. Ralph Loura (CIO, Clorox), Dan Willey (CIO, Wilbur-Ellis), Evan Trent (SVP, School of Rock) and Carl Eberling (CIO, Encore Capital) represented an eclectic mix with backgrounds in consumer goods, agriculture, education and financial services. This unique mix made for a great discussion about the evolution and future of CIOs and IT.

Our CEO and panel moderator, Todd McKinnon, kicked things off by bringing up the notion that every company is now a technology company as mobile, cloud and other technologies seep into all aspects of business. Ralph and Evan both spoke about how Clorox and School of Rock use mobile as a core strategy to connect with consumers. Clorox, for example, repurposed almost all of its sites to be mobile friendly and launched five mobile applications, using technology to build a loyal fanbase. Evan, meanwhile, discussed how technology allows the music school with 100+ franchises worldwide to compete strategically and manage a dispersed IT. The company now sits 100 percent in the cloud and delivers programming from internal mobile apps to its students. 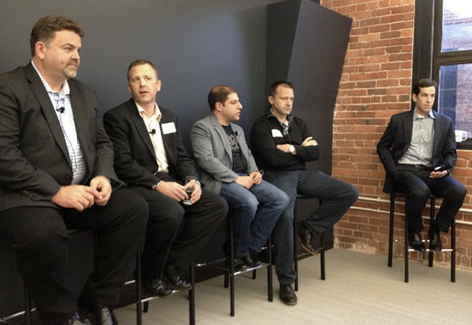 The conversation naturally turned to the CIO’s (and IT’s) evolving role within business. “We’ve been told the CIO role or IT is dead,” Ralph said, adding that IT’s role has transitioned from integration to marrying cloud and on-premises solutions in a way that solves today’s business problems. He joked that IT’s role is now “anthropological,” as The Wall Street Journal’s Rachael King noted from the panel.

Wilbur-Ellis CIO Dan Willey spoke about how in-house IT should focus on understanding the needs of the organization in context. “In the old days, you could be a technical professional and it didn’t matter what your company did,” he said. “But understanding what technology can do and how it can help your business is the biggest part of the [CIO] role.” He added that third-party services like Okta are needed to enable IT to focus on this new role. Carl, who has transformed IT at Encore Capital through cloud and other technologies, agreed. “You have to embed people who understand the heart of what is needed and are constantly challenging what is necessary,” Carl said.

Overall, it was a great discussion about the evolving role of IT as massive changes — and opportunities — affect business from nearly every industry. One thing’s certain: IT is more relevant than ever. Thanks again to our great panelists for participating!

The Oktane21 Customer Awards: Recognizing Eight Leaders Who Rose to the Challenge in 2020

By Okta Okta’s annual conference is an opportunity to celebrate all our customers, but the winners of the Oktane Customer Awards stand out for the sophistication and…

By Jasen Meece The Open Banking market is expected to grow to $43.15 billion by 2026. It is rapidly becoming the security cornerstone for enterprises adopting cloud…

By Brett Shaw Today’s cyber-attacks target people, not infrastructure. Threats are constantly evolving to target the weakest point in an organization's attack surface– the…

By Ana Kutcher There are a number of deployment challenges that might drive an organization to enlist Okta’s Professional Services team, including short timelines, complex…